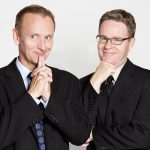 Genre
Authors
Most Recent Book Title
Smart Partners: Building Successful Relationships in Business and Life
Book Description
A general business/how-we-did-it book, Smart Partners outlines the methods and thinking we've used to achieve financial success while also keeping our personal partnership alive and thriving. Drawing on our unique experiences we present principles for building, sustaining, and growing true partnerships in business and life.
Website #1
http://www.BurbaHayes.com
Location (city/state/country)
Costa Mesa, CA, USA
Author bio
Jim Burba and Bob Hayes have been successful life partners for more than 26 years and business partners for more than 16 years. Cofounders of Burba Hotel Network (BHN), the couple develops and produces the world’s most prominent conferences for the hotelinvestment community. BHN was founded on the principle of sharing success, and its events have generated more than US $15 million for scholarships, education, and social services organizations.

In 2013 the duo formed Burba Hayes LLC, an entertainment production company. Their first film Space Station 76 debuted in 2014 at the SXSW Film Festival in Austin, Texas, and was the closing gala film at Outfest 2014 in Los Angeles. Their Broadway musical Disaster! ran on Broadway in early 2016 and is now making its way to London. More films and a reality TV show are in the works.

Together, Burba and Hayes have contributed their expertise in
articles for SUCCESS Magazine, HOTELS’ Investment Outlook, Travel Weekly, Advocate.com, Outtraveler.com, and Successful Meetings. They are contributors and editorial board members for California Meetings and Events magazine.

For four years running, Burba and Hayes have been named by
Out Magazine as one of the “Power Couples to Know” along with luminaries and their life partners, including clothing designer Tom Ford, singer Sir Elton John, and talk show host Ellen DeGeneres.
Professional Speaker Topics
Creating and sustaining successful business partnerships
Creating success in business
Favorite Quote or Personal Motto

The keys to success: "Accept what you're given, make the most of it, do the right thing, then give some back."