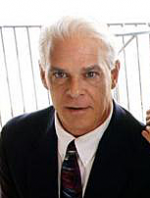 Meet Stephen Parkes. Caught, arrested and booked for a brutal armed robbery conducted at the point of a knife. He’ll soon be indicted as a repeat offender and take a prisoner’s seat before Ana I. Gardiner, arguably the most notorious judge in the State of Florida.

The crime is punishable by natural life. The evidence against Parkes is doubtless. The state offers him thirty years for a guilty plea. Convinced that Parkes belongs behind bars, his public defender abandons any pretense of defending his case. From here, things only get worse.

Having earlier served three years in federal prison for a bank robbery, Parkes will not submit to the lingering death this incarceration promises and he devises another plan for liberty; he’ll leave his body behind and set his spirit free.

Only a long-drop hanging will do. A violent, catastrophic event, Parkes drops more than eight feet into a noose. His heart stops, his breathing, too. He leaves his body and walks into a different world, but not for long.

Parkes won’t stay dead. Incredibly, his body revives itself, only to be put back down by jailers armed with a massive dose of Thorazine. No lawyer, no hope and now, imprisoned in a chemical coma, Parkes sets off on a spectral journey determined to retrace his life and find that place where he became a burden to himself and a burden to others.

Join Stephen Parkes, the hanged man, as he unlocks his riddle and in the process, the door to his cell.

Thirty minutes earlier he hung from a noose. Now, in the grip of a massive dose of Thorazine, Stephen Parkes embarks on a spectral journey determined to find that place where he became a burden to himself and a burden to others. He’s drifted back twenty-one years, to a time when he was a soldier. He’s about to enroll in a soldier’s school. Between 1977 and 1995 its syllabus killed nine men. Graduation is anything but certain.

On the other side of the world a cold war rages. Minefields, Morlocks and a long way from home, follow Lt. Parkes as he walks combat patrols inside the Korean demilitarized zone. The rules governing the Joint Security Area are clear, but Lt. Parkes has orders to follow. Join him as he breaks every United Nations regulation in the book and invades Panmunjom with a platoon of soldiers packing heavy weapons. From here, Parkes’ character flaws catch up and events grow complicated, grim and more dangerous.

Recruited into the 75th Ranger regiment, 1LT Parkes arrives at Ft. Benning and learns everything there is to know about mortars, and lies. He gets honest and makes promises. He exits Jumpmaster school with a clean slate bound for the great Northwest and duty with the 2nd Ranger battalion and men of unparalleled principal. Meet Lieutenant Pete, a young officer of uncompromising bearing and unbreakable constitution, and Captain Mike, a soldier destined for greatness on the world’s stage, and LG, perhaps the most dedicated Ranger of all times. But here Parkes does not belong.

The promises he made are broken. His perception of self barely rises to worthless. He pursues that which he thinks he deserves … ugliness. Five years soldiering had seen hardship and risk, but no one had actually fired a weapon at him. All that’s about to change.

Pursued by gunfire in Miami, Parkes barely escapes with his life. Police possess crime scene documents which identify him with particularity, but criminal charges are never filed. Why not remains a mystery. Determined to find that place where he became a burden to himself and a burden to others, Parkes’ spectral journey continues.

He takes flight to Mississippi and gets sober. There he meets new friends whose words have meaning. Parkes accepts their advice. A personal accounting is taken. Amends are made. Restitution follows. Life blossoms.

Parkes enrolls in law school and volunteers for duty in Criminal Appeals at the Office of the Mississippi Attorney General. It’s a first-rate education that serves him and others well. A loving wife and daughters capture his heart. Personal calamity gives rise to opportunity and Parkes starts a successful business.

Meet Michael Dwayne Sims, a murderer, Ronald Burton, a rapist and Channing Burden, a kidnapper. One of them is repentant, the others as pathological as they come. Soon, sooner than he thinks, Parkes will meet them, too.

Ana I. Gardiner, a young Cuban immigrant practicing law in Fort Lauderdale rises to power. At age thirty-one, she’ll become one of the highest paid executives in South Florida. Her prowess, drive and skills are matchless. At age thirty-six, Governor Lawton Chiles appoints Gardiner to the bench. From there,
it seems the world just might be hers, until ….

As Gardiner's star rises, Parkes’ falls. He had faced a demon from his childhood, a violent, drunken demon, and won. Parkes was sober almost ten years. But there are other demons lurking in his past, quieter, insidious, buried there. And now they raise their head, bare their fangs and beat Parkes to the ground. It’ll be years of armed robberies, federal prison and county lock-ups before he even begins to see who hit him. But eventually, he sees these monsters for who they are and finds that place where he became a burden to himself and a burden to others.

On a bitter day in December 1650 Anne Greene hanged for the crime of infanticide. She had wanted it done right. Anne knew what followed a criminal’s public execution and she did not want to be alive when that happened. Her friends obliged. Pulled down on her feet and struck her body repeatedly, they did. After a time, Anne was taken down, placed in a simple coffin and then given over to the dissectionists. On the slab at Oxford, the physicians observed that Anne was still breathing, that Anne still lived. Granted a full reprieve, Anne Greene lived free and prospered.

In 1724 Maggie Dickson hanged for the crime of infanticide. Pronounced dead, her body was placed in a simple coffin and loaded onto a horse-drawn cart. On the road to Musselburgh, the cartman alerted to the sound of knocking from inside the coffin. He opened its lid to find Maggie alive and well. Granted a full reprieve, Maggie Dickson lived free and prospered.

In the autumn of 1740 William Duell hanged for murder. His body lingered in the noose for twenty minutes before being cut down. Only then was he placed in a box and carted to Surgeon’s Hall. Duell was stripped and laid on the slab where his faint breathing was noted by the cutters. Somehow, he’d survived. His case gathered public attention and his sentence commuted to transportation. Exiled to Australia, William Duell lived free and prospered.

In 1885 John Henry Lee should’ve hanged for murder. The gallows worked perfectly, that is until the condemned climbed it. Three times John Henry Lee stood on the trap door. Three times it refused to open. The executioner could find no mechanical flaw. The Home Secretary immediately commuted his sentence to life imprisonment and later to time served. John Henry Lee lived free and prospered.

In June 2007 Stephen Parkes was indicted by the State of Florida for his second robbery with a deadly weapon and then noticed as a habitual violent felony offender. In return for a plea the state was offering thirty years. Self-contempt, self-hatred, vigilante justice; Parkes could see every reason supporting his guilt, but not a single one justifying his life. An execution would fix that … his own. Prior to trial, Parkes dropped more than eight feet into a noose. No one survives that kind of hanging. But Parkes wouldn’t stay dead. And then things began to change.

It is said that history repeats. It is not said when.

Or why.
Website #1
https://www.facebook.com/TheHangedManSeries
Blog
http://www.thehangedmanseries.blogspot.com/
Amazon Page
https://www.amazon.com/author/stephenparkes
LinkedIn
http://www.linkedin.com/profile/view?id=234249050&trk=nav_responsive_tab_profile
Facebook
https://www.facebook.com/TheHangedManSeries
Twitter
https://twitter.com/HangedManSeries
Location (city/state/country)
USA
Author bio
Stephen Parkes (1960 - ) was born in Detroit, Michigan. Stephen earned a Juris Doctorate from Mississippi College School of law and a Ranger tab from the U.S. Army. He is a former Weapons platoon leader with the 2d Ranger battalion. He is one of very few individuals to experience a long-drop hanging (in his case more than eight feet) and live to tell about it. He was twice convicted of robbery with a deadly weapon, a knife, and spent four and one-half years in federal prison and county lock-ups. Stephen was certified by the State of Florida as a habitual violent felony offender in 2008. These days, Stephen is an honorable man and father. These days, Stephen lives free and prospers.
Favorite Quote or Personal Motto