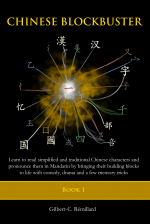 Genre
Authors
Most Recent Book Title
Chinese Blockbuster 1
Book Description
At last, a comprehensive, fun and pragmatic method to help you read simplified and traditional Chinese characters and pronounce them in Mandarin!

Each character is brought to life through funny and dramatic stories as well as why-didn’t-I-think-of-that mnemonics. Its building blocks, definitions and pronunciations are all part of the memorization process, allowing you to remember all aspects of a specific character in one fell swoop.

This is the first book of an upcoming series that contains the following key features:

Over 4000 characters will be included, a number necessary for reaching reading fluency in modern Chinese.
All aspects of a Chinese character are covered:
Its simplified and traditional forms
The building blocks making up each form
Its various definitions
Its various pronunciations in Mandarin
Its known etymology, ancient meanings and shapes
Examples of use
Additional information, such as its frequency of use and other fascinating facts
The characters are presented in a logical order by prioritizing their frequency of use while considering the building blocks that compose them, the latter being presented first. Also, characters with similar shapes or having a similar role or meaning are kept together, greatly facilitating the learning process.
Intuitive, easy to recall mnemonics and funny or sometimes shocking stories that integrate all aspects of a given character are provided for improved retention.
The pronunciation and tone of a character are merged into the memorization process by making use of carefully selected sound words that form part of a cleverly designed sound system, one sound word representing one specific pronunciation and tone.
Fully illustrated, to help you form images in your brain.
Fully indexed, to allow searching a character by its definitions or its pronunciations in pinyin.
You will effectively learn to recognize and pronounce virtually all Chinese characters you are bound to come across, while being entertained!
Additional Book Titles
Chinese Blockbuster 2 to 8 on the way!
Website #1
http://chineseblockbuster.com
Facebook
https://www.facebook.com/ChineseBlockbuster/
Twitter
https://twitter.com/gcremillard
Location (city/state/country)
Gatineau/Quebec/Canada
Author bio
Engineer in Physics with a Master Degree in Aerospace engineering, Gilbert-C. Rémillard has spent part of the last two decades learning a dozen foreign languages. Chinese, being so different than the other languages, has quickly become his passion and he is here to prove that learning Chinese is not rocket science!