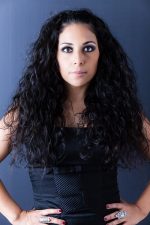 Genre
Authors
Most Recent Book Title
Faux Queens - Fauxing the Real: Biological Women, the Art of Drag, and Why the Real IS Drag
Book Description
Can women be drag queens?

Brandi Amara Skyy's book says we can and we do!

And here's the proof - all kinds of it.

From expanding theories of drag to defining new forms of gender expression, this book is the first to situate the female drag queen within pre-existing discourses of drag, gender identity and performance.

She is a drag artist who specializes in unconventional creativity + self-expression and a writer who believes in the power of story to inspire and challenge/change thoughts, perceptions, and actions. Through her drag artistry, writing, and creative entrepreneurial ventures, she is creating the kind world she wants to live in – creatively driven, transformative, empowering, and infused with a little stardust and glitter.

She holds a BA Dance and an MA in Women's Studies with an emphasis in queer and gender performance from Texas Women's University. Her career highlights include being named one of Dallas’ Latino leaders to watch by Latino Leaders Magazine; being featured in publications like the Dallas Voice, The Advocate, GenderFork, The Huffington Post, and the nationally acclaimed Drag Queen Guide; gracing over 100 stages worldwide; judging 50+ drag pageants across the United States; touring with the Bob Marley Festival; opening up for Lady Gaga and Jon Secada, and teaching performance and makeup workshops across the globe.

She made history March 2013 winning the first Diva USofA prelim in Oklahoma and sealed her legacy March 2014 winning the first ever national Miss Diva USofA title. And through her initiatives like GAG Magazine and the creation of online safe spaces for her female drag community, she continues to be a thought leader in the LGBTQ and creative communities.

She is the author of two books on drag and is a staff writer for the Dallas Voice and a feature op-ed writer for Global Grind. She is currently working on her first memoir on becoming — a writer and everything else (queer, activist, drag queen) in-between.

When she’s not busy trying to be her own Big Bang theory, she loves cruising, her partner, annoying her three misfits Zen, Simon, and Cayman, all things sparkly (and drag), binge watching TV shows she’s already watched 100 times, and living her life as a daily reminder that you can be whatever the fuck you want to be.
Professional Speaker Topics
Gender Performance, Drag, Art Activism, Finding Your Origin Story(ies), Turning Yourself Into Art, Bringing Your Diversity to Your Writing
Favorite Quote or Personal Motto

Not all those who wander are lost ~ J. R. R. Tolkien