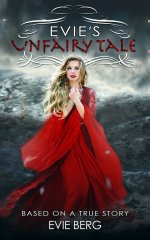 Genre
Authors
Most Recent Book Title
Evie's Unfairytale
Book Description
Truth is stranger than fiction. Or in this case — more tragic. What began as a fairy tale for one woman slowly dissolved into a nightmare as her dreams were torn apart by lies and abuse. Now she is prepared to unveil the truth. This is her release story. Evie’s life was never easy. She experienced financial turmoil from a young age and became independent at sixteen. A few years later she would experience a heart-breaking marriage that she would ultimately have to abandon. At age 43, Evie meets the love of her life: Chad. Evie and Chad’s relationship is perfect in every way, and a happy ending is finally on Evie’s horizon. But two women are determined to stop Evie and Chad’s happiness. Rachel and Tracey: the mothers of Chad’s two children will stop at nothing to get Chad back and destroy Evie in the process. They use lies, deceit, psychological tactics, and even their own children to unravel the love and trust between Chad and Evie. Not unlike epic tales of old, this is a story of love found and love lost. Of a tragedy that comes full circle.
Website #1
http://www.eviesunfairytale.com
Website #2
Barnes and Noble
Amazon Page
Amazon
Twitter
Twitter
Pinterest
Pinterest
Author bio
Non-fiction author who has written and published her first romance/drama novel based off of her own life events.