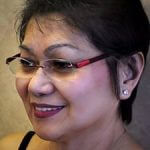 Genre
Authors
Website #1
http://www.gocruisinglifestyle.com
Blog
http://rvcruisinglifestyle.blogspot.com
LinkedIn
http://www.linkedIn.com/profile/view?id=66383430
Facebook
https://www.facebook.com/carol.colborn
Twitter
http://www.twitter.com/carolrvcruising
Location (city/state/country)
Mesa, Arizona
Author bio
Carolina Esguerra Colborn was prominent in Philippine business before she migrated to the US in 2004. She was former President/CEO of BayanTrade, the eprocurement hub of the Philippines, Managing Director of SAP Philippines, Deputy Commissioner of the Bureau of Internal Revenue, General Manager of MegaLink, the ATM switch of banks, and Vice-President of the Development Academy of the Philippines. She also worked for Andersen Consulting (now Accenture), IBM and NCR. She holds a BS in Mathematics, MBA, and DPA abd from the University of the Philippines.

Carolina retired in Seattle, Washington where her eldest daughter lives. While babysitting her grandson, she taught Diversity Issues in Business at the Seattle Central Community College, Project Management and Communications Management in Central Washington University, and English as a Second Language in Renton Technical College. She also volunteered for SCORE, the Service Corps of Retired Executives. In 2008 she married Bill and six months later they started their American cruise in an RV. Midway she started a blog which averages 13,500 views per month, 22,000 in the best month, 19,000 for the best post. Four posts have been published in Philippine and American e-magazines.