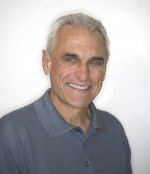 Genre
Authors
Most Recent Book Title
Are You Robbing Your Brain of Oxygen?
Book Description
Based on my discovery that doubling chest expansion improves productivity, income, grades, self-confidence and creativity, I show how common activities (school backpacks, texting, bench presses, sit-ups) can permanently reduce brain oxygen unless the tension and microfibers (mild scar tissue) are released to restore flexibility in the three breathing ranges (stomach, diaphragm and chest).
Additional Book Titles
The Efficient Golfer, Are You Flexible Enough for Golf?, The Somax Golf Swing
Website #1
http://www.somaxsports.com
Website #2
http://www.swing-speed.com
Amazon Page
https://www.amazon.com/default/e/B00NTBYTM2/ref=dbs_p_pbk_rwt_abau?redirectedFromKindleDbs=true
LinkedIn
https://www.linkedin.com/in/bobprichard/
Facebook
https://www.facebook.com/bob.a.prichard
Twitter
https://twitter.com/SomaxSports
Pinterest
https://www.pinterest.com/somaxsports/pins/
YouTube
https://www.youtube.com/user/somaxperformance
Location (city/state/country)
Tiburon, CA, USA
Author bio
I have been improving sports performance (44 Gold Medals, 11 World Records) since 1970 by improving efficiency, rather than strength and endurance. I first release microfibers (mild scar tissue) that prevents athletes from stretching, then I teach them how to move more efficiently. My pro golfers have won the US Open as a rookie, improved their putting from #113 to #1, quadrupled their tour income and increased their longest drive from 295 to 400. My baseball players have increased their stolen bases from 14/15 to 32/33, improved their 40-yard time from 4.92 to 4.27 and increased their income from $500K to $1.75 million. My runners cut a minute per mile or more off their running pace and tennis players add 20 mph to their serve. As I released microfibers restricting chest expansion, my athletes received two promotions and three raises in pay, improved the GPA from C+ to straight A's and improved their self-confidence, self-esteem and sociability.
Professional Speaker Topics
Have we impaired the brains of two generations with school backpacks? Is the spike in school shootings a second generation effect of school backpacks? Are school backpacks the reason American distance runners are slower than 42 years ago? Is the rise in student obesity, diabetes,depression and anxiety due to school backpacks? Does a six-pack rob your brain of oxygen? Things your pediatrician won't tell you.
Favorite Quote or Personal Motto