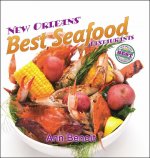 Website #1
https://www.annbenoittextandimage.com/
Author bio
Ann Benoit has earned her living as a writer for her entire adult life.
With a Juris Doctorate in Civil Law, Benoit worked as in-house Staff attorney, a legal researcher and writer, for the Louisiana court system for decades. In that capacity, she received 8 national recognitions from West Publishing Co.
With a legal technical writer job by day, at night she would moonlight as a copy editor, fact checker, editor and jack of all trades for local New Orleans writers in a variety of fiction and non-fiction fields.
Developing an expertise in food photography, Benoit wrote and/or photographed five cookbooks. Her authored and photographed works include The Broussard’s Restaurant & Courtyard Cookbook traditionally published by Pelican Publishing Co. in March 2012, New Orleans Best Ethnic Restaurants traditionally published by Pelican Publishing Co. Jan. 2014 and New Orleans Best Seafood Restaurants traditionally published by Pelican Publishing Co. Sept. 2015. Her cookbooks have been named to the Top 20 Louisiana Cookbooks by the Senior Editors of Amazon.
Benoit works as a commercial book packager, bringing other people’s books to life.
An accomplished food photographer, Benoit did the photography for the books Across the Table a cookbook by Anne Leonhard and Harriet Robin published by the New Orleans School of Cooking and QVC June 2017 and Magic in a Shaker: A Year of Spirited Libations by Hotel Monteleone Carousel Bar head bartender Marvin Allen traditionally published by Pelican Publishing Co. July 2014.
She also edited local author Carroll Devine’s memoir, Between the Rails and consulted on layout with local author Eve Brouwer for her book My Grandmother Danced.
In addition to her photography and cookbook career, Benoit currently works as columnist and part-time reporter for the Times-Picayune, New Orleans’ oldest daily newspaper in the Northshore bureau.
Ann Benoit can be reached at FB Ann Benoit or FB New Orleans Best Restaurants. Her photography may be viewed at AnnBenoitTextAndImage.com