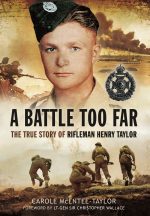 Genre
Authors
Most Recent Book Title
A Battle Too Far
Book Description
Port Said September 1st 1945 "As the ship pulled into Alex, the dockside was a hive of activity. The captain had radioed ahead and so there was a battalion of the Kings' African Rifles (KAR)waiting to disarm us as we disembarked. All these KAR's were standing at the order as a staff officer informed us that we were to be placed under arrest and escorted to Khartoum, here we would contemplate our mutiny for 2 years. Our battalion was still under arms; the sound of the cocking of weapons greeted the officer's threat, and a lone voice asked "And who's going to escort the darkies?" All our officers were powerless, we had the drop on the KAR's, all that was needed was for someone to pull the trigger.'

A Battle Too Far is the true story of Rifleman Henry Taylor 6923581, late 7th Battalion The Rifle Brigade (1st Battalion London Rifle Brigade) and is based on his diaries and recollections as told to his son Lawrence. The Foreword is by Lt-Gen Sir Christopher Wallace Chairman of The Royal Green Jackets (Rifles) Museum in Winchester.

Henry's war began in October 1942 as the 2nd Battle of El Alamein commenced and continued almost non-stop for the next three years. From El Alamein to Tunisia he fought with the 8th Army as they finally pushed Rommel back to the sea. Expecting to return to Britain in preparation for D Day at the last minute plans were changed and they were ordered to Italy instead. Here they found themselves fighting for every inch of land against determined, well dug-in defenders, in conditions often resembling the trenches of WW1. Their reward? Their campaigns forgotten as the world concentrated on the D Day invasion and to be called 'D Day Dodgers' despite enduring some of the heaviest fighting of the war. As Europe celebrated VE Day Henry's war continued as they raced to Austria to prevent Yugoslav forces annexing Carinthia in the opening shots of the Cold War. Then, as the men around him were de-mobbed, Henry and the rest of the Battalion were sent back to Egypt to protect British interests in the continuing civil unrest. Dejected and fed up it only took one incident to spark a mutiny.
Additional Book Titles
Herbert Columbine VC
Military Detention Colchester from 1947. Voices from the Glasshouse
Surviving the Nazi Onslaught. From the Defence of Calais to the Death March To Freedom
The Battle of Bellewaarde June 1915
Website #1
http://www.carolemctbooks.info/
Blog
http://carolemctbooks.tumblr.com/
Amazon Page
http://www.amazon.co.uk/Carole-McEntee-Taylor/e/B0034ND9TE/ref=ntt_athr_dp_pel_pop_1
LinkedIn
http://www.linkedin.com/nhome/?trk=
Facebook
https://www.facebook.com/carole.mcenteetaylor?ref=tn_tnmn
Location (city/state/country)
Essex UK
Author bio
I love writing and love history so I suppose it’s not so surprising that I write historical books! I enjoy writing both military history and historical fiction and the idea is to give the author royalties of any military history titles to military charities whilst proceeds from the fiction will go to me to help fund the research into both - at least that's the theory!
My military history books are all published by Pen & Sword and my historical fiction by GWL Publishing.

I live in on the Essex coast with my husband and work at the Military Corrective Training Centre (MCTC)in Colchester. I have quite wide ranging interests and together with my husband David I have also written two spiritual books, The Re-Enlightenment and Holiday from Hell.