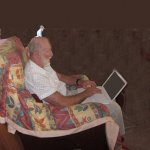 Genre
Authors, Publishing Industry Professionals
Most Recent Book Title
Anikó: The stranger who loved me
Book Description
It is the life story of a woman who achieved the impossible and survived the unsurvivable -- more than once. Her courage, imagination and ruthlessness saved her and her family from death during the terrible years of the Second World War. Hampered by the stifling atmosphere of life behind the Iron Curtain, and by being a woman in a male-dominated culture, she nevertheless managed to build a million-dollar export business. But the greatest challenge of her life was to protect her husband's dignity over 31 years.
Additional Book Titles
Cancer: A personal challenge
Website #1
An Australian storyteller's showcase
Website #2
Anxiety and depression help site
Blog
Bobbing Around
Amazon Page
https://www.amazon.com/-/e/B006HP75NM
LinkedIn
https://www.linkedin.com/in/bob-rich-a06a3528/
Facebook
https://www.facebook.com/AscendingSpiral/
Twitter
http://@bobswriting
Location (city/state/country)
Australia
Author bio
Bob is an award-winning editor, working for several small, independent publishers and a steady stream of writers pre-submission. He is the author of 17 books, 6 of them nonfiction. Five of his books have won awards. However, he mainly works as a Professional Grandfather, working for a survivable future, and one worth surviving in.
Favorite Quote or Personal Motto

Live simply, so you may simply live.