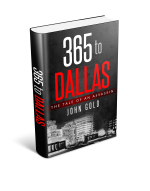 Genre
Authors
Most Recent Book Title
365 to Dallas
Book Description
The Assassination of President John F. Kennedy is still as relevant today as it was on November 22, 1963. Over the years, novices and experts have poured over evidence, witness testimonies, pictures and film of the covert cover-up and controversial killing of JFK. To date, nobody has been able to penetrate the elusive plot and classified plan that was established 365 days before November 22. 1963 Until now.
The training, planning, and actions leading up to the most infamous crime of the twentieth century is as controversial as the assassination itself. 365 to Dallas is the never before heard confession of one of the ten team members that carried out the execution of President John F. Kennedy that fateful November day in Dallas, TX over half a century ago.
Mark, only eighteen at the time, was one out of ten soldiers selected to be highly trained for this forbidden and deeply covert mission. Six shooters and four distractors under the umbrella of the United States Intelligence agencies were trained for one mission only: The assassination of President John F. Kennedy.
Author John Gold has over a decade of military and civilian law enforcement investigative training. In 2000, John Gold was called to ministry. In the summer of 2013, John’s mentor Mark, while watching the 2007 Movie Shooter, broke down and, over the course of the next year, confessed to being one of a team of ten that assassinated President Kennedy. For five years, John Gold investigated Mark’s claims, trying to disprove the confession. John was unsuccessful.
365 to Dallas is the true tale of Mark’s participation in the murder that occurred in Dallas, TX over half a century ago. You will discover the new proof, evidence and the never before told tale of the 365 days of training, planning and execution leading up to that fateful November day.
Website #1
http://www.365todallas.com/
Website #2
http://www.authorjohngold.com/
Amazon Page
https://www.amazon.com/dp/B07KJVKTGR/ref=sr_1_1?ie=UTF8&qid=1542248503&sr=8-1&keywords=365+to+dallas
Facebook
https://www.facebook.com/365-to-Dallas-312825345976418/
Location (city/state/country)
Greenville, SC
Author bio
John Gold was born in Somerville, NJ in 1966. He has lived in Florida, New Hampshire, Virginia and Pennsylvania. In 1985, at the age of 18 he entered the US Armed Forces as a Military Policeman. John has been deployed to Europe and Asia as he served his country honorably from 1985-1991 & 1997-2000.

During John’s last tour, unfortunately, he was critically injured while stationed near the DMZ in Korea and is now a 100% disabled veteran. That didn’t dampen his drive to serve. Always a civil servant, John was a police officer, firefighter, and EMT serving his community.

In 2001, John was called into ministry and became a personal counselor. Throughout his life, John always had a passion for photography and filmmaking and in 2014 he graduated from the prestigious Ringling College of Art + Design earning his BFA in filmmaking. Today John resides in Greenville, SC. He is a minister, author, and filmmaker and is dedicated to serving Jesus Christ with all of the talents and skills he has been given.