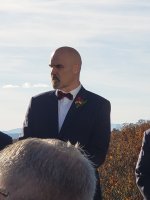 Genre
Authors
Most Recent Book Title
How To Be Your Own Bodyguard
Book Description
A book of techniques used by the author to keep his VIP clients safe in dangerous places. Read it and reduce the risk of every being a victim of crime by 80%
Additional Book Titles
"ASPIRE Because SMART goals are dumb" (in production)
Website #1
http://h2bg.com/
Blog
http://h2bg.com/tip-of-the-week/
Amazon Page
https://www.amazon.com/How-Your-Own-Bodyguard-Instinctive-ebook/dp/B005Z8L6YG
Facebook
https://www.facebook.com/How-To-Be-Your-Own-Bodyguard-108423895936752/?ref=bookmarks
Twitter
https://twitter.com/NickHughesKrav
Location (city/state/country)
Cornelius, NC, USA
Author bio
I'm a former member of the French Foreign Legion who worked as a bodyguard to the rich and famous including members of the Saudi Royal Family. I have studied martial arts for over fifty years and hold black belts in multiple systems, I've boxed, taught unarmed combat and defensive pistol. I also starred on Spike TV's Deadliest Warrior.

With a background like that I decide to teach half a million people how to defend themselves before casting off my mortal coil. I have a full-time school, the book, teach seminars, have an upcoming TED Talk and there are various companies who've produced my DVDs.

"While the will to survive is instinctive the ability is very much learned."

"Violence isn't always the answer but, when it is, it's the only answer and you'd better be able to deliver."