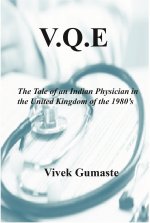 Genre
Authors
Most Recent Book Title
VQE: The tale Of an Indian Physician in the United Kingdom of 1980's
Book Description
In 1980, after completing medical school in India, the author landed in Britain in pursuit of his dream to get to the United States. He was young, a full 26-year-old, ambitious and opinionated. The two and half years that he spent in Britain were eventful years and this book captures that period.
This dazzlingly original book set in Great Britain of the 1980’s. does not subscribe to any set genre. It is a unique chronicle that weaves the current events of those times with the memoir of a young foreign physician in an alien land to produce a piece of work that is informative, touching at times and entertaining in parts. It captures the despair, the hopes, trepidations and travails of this young man from a financially indigent India of the 1980’s as he charts his way through the land of his colonial masters and the innumerable challenges of this tumultuous period of his life: professional setbacks in the form of certifying exam failures, joblessness as he moves from one part of Britain to another changing cities sometimes every two weeks in search of work; a cataplexic agoraphobia as he tries to come to terms with racism on the streets. Meanwhile in the background a host of remarkable events are being played out- Lady Diana’s wedding, inter-racial riots and the British-Argentina war over the Falkland Islands.
Amazon Page
https://www.amazon.com/V-Q-Indian-Physician-United-Kingdom/dp/1644679787/ref=tmm_other_meta_binding_swatch_0?_encoding=UTF8&qid=1550030667&sr=8-1