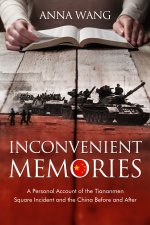 Genre
Authors
Most Recent Book Title
Inconvenient Memories
Book Description
Inconvenient Memories is a rare and truthful memoir of a young woman's coming of age amid the Tiananmen Protests of 1989.
In 1989, Anna Wang was one of a lucky few who worked for a Japanese company, Canon. She traveled each day between her grandmother’s dilapidated commune-style apartment and an extravagant office just steps from Tiananmen Square. Her daily commute on Beijing’s impossibly crowded buses brought into view the full spectrum of China’s economic and social inequalities during the economic transition.
When Tiananmen Protests broke out, her Japanese boss was concerned whether the protests would obstruct Canon’s assembly plant in China, and she was sent to Tiananmen Square on a daily basis to take photos for her boss to analyze for evidence of turning tides. From the perspective as a member of the emerging middle class, she observed firsthand that Tiananmen Protests stemmed from Chinese people’s longing for political freedom and their fear for the nascent market economy, an observation that readers have never come across from the various accounts of the historical events so far.
Additional Book Titles
A Personal Account of the Tiananmen Square Incident and China Before and After
Website #1
https://chinachannel.org/2019/06/04/tiananmen-memories/
Website #2
https://www.youtube.com/watch?v=yw2Uj1M-vCc
Blog
http://annawangonline.com
Amazon Page
https://www.amazon.com/Inconvenient-Memories-Personal-Tiananmen-Incident/dp/0996640576/ref=tmm_hrd_swatch_0?_encoding=UTF8&qid=&sr=
LinkedIn
https://www.linkedin.com/in/anna-wang-b0087b20/
Facebook
https://www.facebook.com/profile.php?id=100006594887703
Twitter
https://twitter.com/AnnaWangYuan
YouTube
https://www.youtube.com/watch?v=qXZDNx_SVrE&t=53s
Location (city/state/country)
Irvine/California?USA
Author bio
Born and raised in Beijing, Anna Wang received her BA from Peking University and is a full-time writer. She has published nine books in Chinese. These include two short story collections, one essay collection, four novels, and two translations. An English translation of her short stories, Beijing Women: Stories, was published in 2014. Inconvenient Memories is her debut book written in English.
Professional Speaker Topics
China Human Rights, Memoir Writing, Writing as a Therapy, Writing in Second Language
Favorite Quote or Personal Motto

“If there is a hard, high wall and an egg that breaks against it, no matter how right the wall or how wrong the egg, I will stand on the side of the egg." by Haruki Murakami