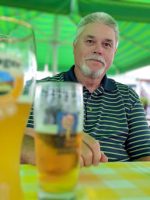 Genre
Authors, Speaker
Most Recent Book Title
Flight 7 Is Missing: The Search for My Father's Killer
Book Description
FLIGHT 7 is MISSING: The Search for My Father’s Killer is the true story of the author's decades-long investigation into the mysterious and unsolved 1957 Pan American airliner crash that killed his father, the navigator and co-pilot, and all 43 others aboard. His book was published in May 2021 and debuted as No. 1 on Amazon's Hot New Releases in Aviation and Aviation History. It has received outstanding reviews.
Additional Book Titles
Kill the Messenger: One Man's Fight Against Bigotry and Greed
Website #1
http://www.kenfortenberry.com
Location (city/state/country)
Boone, North Carolina, USA
Author bio
A nationally recognized journalist and author, Ken H. Fortenberry spent more than 40 years in the newspaper business and earned more than 120 state, regional and national awards for excellence in journalism.

In 1987 millions of Americans were introduced to his work when he was featured on the CBS News program “60 Minutes,” the NBC "Today" show and profiled in the New York Times for his courageous reporting of a crooked South Carolina sheriff. He later wrote about his experiences in the critically acclaimed non-fiction book KILL THE MESSENGER, published by Peachtree Publishers, and optioned several times for a TV movie.