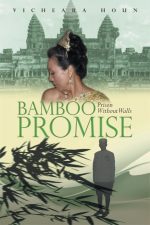 Genre
Authors
Most Recent Book Title
Bamboo Promise/Prison Without Walls
Book Description
Cambodia is a country with beautiful temple and arts, and steeped in the Buddhist religion. Despite this, the once-civilized society turned to violence and proceeded to destroy itself. People betrayed their parents. their children, and their friends. In the process, they extinguished everything that represented the truth and beauty of Cambodia.
How does an individual withstand such experiences and resume life after having fought for a single grain of rice and witnessed unbelievable cruelties, such as mothers crushing their babies, young children willing to kill for a morsel of food. and the entire decimation of normal urban life?

Bamboo Promise is the remarkable and intensely personal autobiography of a woman raised as the sheltered and privileged only child of a prominent Cambodian family. As a young bride, she and her entire family were swept up in the Cambodian genocide of the 1970s. She recounts how she adapted and survived in the harsh killing fields of the Khmer Rouge terrorists in the compelling narrative.

Although the author survived many horrors, Bamboo Promise is not a horror story. It is the story of the evolution of a human spirit as she endured a tumultuous upbringing and unspeakable tragedy. The insight into life after Pol Pot's defeat and Cambodia's subjection by the communist Vietnamese are particularly unique. Bamboo Promise is also a story of hope, as she found lasting happiness in the United States.
Additional Book Titles
BAMBOO PROMISE II/ DECODING THE PAIN
Website #1
http://boramtz.wix.com/bamboo-promise
Amazon Page
http://www.amazon.com/Bamboo-Promise-Prison-Without-Walls-ebook/dp/B007SCX3X4/ref=sr_1_1?ie=UTF8&qid=1403541315&sr=8-1&keywords=bamboo+promise
Facebook
https://www.facebook.com/VichearaHoun?ref=hl
Twitter
https://twitter.com/VichearaH
YouTube
https://www.youtube.com/watch?v=ZTHtzAIZHLE
Location (city/state/country)
AZ/ US
Author bio
Vicheara was born in Phnom Penh, Cambodia in the peaceful days before the Khmer Rouge communist rebels engulfed this small Southeast Asian nation in four years of death and destruction. As the only child of a wealthy and politically prominent father, her young life was one of great contrasts. She went to University of Phnom Penh to study pharmacy and met her husband there. Their forbidden romance caused much conflict but eventually they prevailed and married in Janurary,1975 , four months before the Khmer Rouge took over and their lives turned upside down.

All the residents of Phnom Penh, including Vicheara’s entire family, were forced out of their homes and expelled from the city in a mass exodus by the Khmer Rouge rebels. One by one, every member of Vicheara’s family starved to death. Her young husband was murdered.

Emaciated and alone, she managed to survive until 1979 when the Khmer Rouge was defeated by the Vietnamese and the survivors were liberated. Vicheara returned to her paternal home. She finished her pharmacy degree and made a daring escape to a refugee camp in Thailand. There she met the man who would become her second husband and they made their way to the US in 1984, where they had two children, a boy and a girl. She received her bachelor’s degree in chemistry. She later divorced and met her current husband in Portland , OR.

Later, they moved to Arizona where Vicheara finished writing this first book, Bamboo Promise, to share her amazing story of survival with the world. She is now working on her 2nd book.
Professional Speaker Topics
GENOCIDEE SURVIVAL STORIES
Favorite Quote or Personal Motto

BEND THE BAMBOO WHEN IT STILL YOUNG

DROP BY DROP WILL FILL THE CONTAINER