The Rev. Susan B Bowman 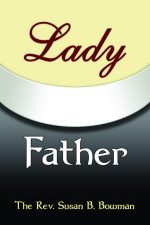 Genre
Authors
Most Recent Book Title
Lady Father
Book Description
“Lady Father” is a narrative account of my journey through the ordination process in the Episcopal Diocese of Southern Virginia of the 1980’s and the subsequent years of ordained ministry. As the first female admitted to the ordination process by the Rt. Rev. C. Charles Vaché, 7th Bishop of Southern Virginia, who was then a strong and vocal opponent of the ordination of women, I was a “reluctant pioneer.” Dubbed “the Lady Father,” I have served the church for 33 years and I am now offering my experiences and the insights I learned from them to others who feel a similar call and who may find themselves a similar journey “against the flow.”

“Lady Father” is filled with anecdotes that will ring true with many clergy, bring hope to those aspiring to ordination, and shed light on the continuing debate in the Church over who should be ordained. My story is a unique blend of the obstacles, denials, and rejections I faced and overcame, along with the uplifting moments and spiritual growth that came out of the struggle. It is truthful and so, at times, it is painful; it is often light-hearted, even humorous; it is moving as it deals with real people, real events, and real emotions; and, most of all, it is mine – my story, my journey, my life.
Additional Book Titles
God is in the Journey
Website #1
https://ladyfather.com
Blog
https://ladyfather.com/lady-fathers-blog
Amazon Page
https://www.amazon.com/Lady-Father-Susan-Bowman/dp/1608300560/ref=tmm_pap_swatch_0?_encoding=UTF8&qid=&sr=
LinkedIn
https://www.linkedin.com/in/susan-bowman-b5ba7150/
Facebook
https://www.facebook.com/ladyfather
Twitter
https://www.twitter.com/susanbbowman1
YouTube
https://www.youtube.com/channel/UCYiKpGC87SZwPmScEYcITEQ?view_as=subscriber
Location (city/state/country)
Glenmont/NY/USA
Author bio
Susan Bowman was born and raised in Petersburg, Virginia. In 1969 she received a BA in Philosophy from the College of William Mary. She began her long and mostly self-taught journey toward computer competency, living and working around the Southeast. Through on-the-job training, Susan mastered the first automatic typewriter (MTST) and by 1971 was formatting a book on aircraft carriers using the MTSC (Magnetic Tape Selectric Composer).

Susan worked for the City of Petersburg for almost eight years before answering a call to ordained ministry in the Episcopal Church. She attended seminary at the University of the South’s School of Theology and graduated with a Masters of Divinity Degree in 1984.

Following her ordination to the priesthood in 1986, Susan served as Chaplain in a girls’ group home and then as Pastor for three churches until retiring in 2007. She worked as a Travel Specialist for AAA and a columnist for the AAA bi-monthly magazine, “Going Places.” In 2007, she answered another call to be “Pastor-on-Loan” to a small United Methodist congregation where she served for 12 years.

In May 2010, Susan became the Senior Editor of an online magazine, Our Heritage Magazine Online. In this capacity, she writes feature articles, recurring columns, and lead stories; she edits all copy for the six online and two printed issues.

In 2011 she published her memoir, Lady Father, which traces her journey through the ordination process and subsequent ministries. Learn more about it and Susan at https://ladyfather.com.

She has also written a prequel to Lady Father, “God is in the Journey,” which is available as a Kindle eBook on Amazon.com. She is retired and living in upstate New York where she volunteers for Hospice.