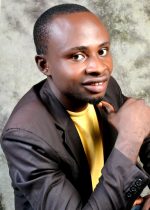 Genre
Authors
Services Offered
Activism, Writing, Blogging
Most Recent Book Title
Decide Your Future
Book Description
Time has passed when people should make decisions ignorantly. Everyone should be very careful when doing anything that requires a decision. Yes, be careful, your destiny is in your decision; whatever decision you make today will affect you tomorrow.

Decision is a daily task which every human must partake in. Irrespective of who you are, you can't succeed without making decisions. If you don’t know how to make a decision at the right time, you would face so many challenges. A good leader is known for his decision likewise any responsible and successful person. Without making right and great decisions, you can’t be a good manager, parent or leader. This book is written to help you attain great heights in your endeavours.

This book has no defined category of people as niche; everyone can read it. It’s a book for the general public. Irrespective of your personality; position, business, gender, age, tribe, religion, level of education, achievement, race and colour, this book is for you.
Additional Book Titles
Wake Up, Knowing Your Relationship Status
Website #1
https://gpo.ng
Blog
https://gpo.ng
Amazon Page
https://amazon.com/author/gpoparaugo
LinkedIn
https://www.linkedin.com/in/gpoparaugo/
Facebook
https://facebook.com/mroparaugo
Twitter
https://twitter.com/mroparaugo
YouTube
https://www.youtube.com/channel/UCLzgDeVrvcqF1quew1taLCQ
Instagram
https://instagram.com/mroparaugo
Location (city/state/country)
Owerri, Imo State, Nigeria
Author bio
Godspower Oparaugo is a Nigerian writer, author, social activist and blogger. His literary works focus on self-development and social reformation. His writing style has been considered easy to understand. In 2017, he was appointed Nigerian chapter president of the World Constitution and Parliament Association (WCPA). Godspower Oparaugo is the founder of Initiative for African Citizens (IAC), a nongovernmental organization that advocates for youth participation in governance and decision making processes in Africa.

Early life: Godspower Oparaugo is the sixth of eight children of his parents, was born in Okolochi, a remote community in Owerri West, Imo State, Nigeria. His parents, Boniface Oparaugo and Theresa Oparaugo struggled to raise him and his siblings. He completed his primary education in Community School, Okolochi, went to Comprehensive Secondary School, Emeabiam and completed his secondary education in Newbreed Secondary School, Badiko, Kaduna State. He has made several attempts to be enrolled into seminary school, but was not accepted. Though, his interest for priesthood was a decision of his mother which had influenced his childhood.

Educational Background: Being fortunate, his parents were able to train him in higher education and he became the first graduate of his family. Godspower Oparaugo studied Purchasing and Supply at Federal Polytechnic Nekede, Owerri, and Marketing at Abia State Polytechnic, Aba, Nigeria. In 2017, he served his fatherland under the umbrella of the National Youth Service Corps (NYSC) at Eket, Akwa Ibom State.

Career: Godspower Oparaugo began his writing career in Owerri, during his first year in school at Federal Polytechnic Nekede, Owerri in 2010. He has written articles, inspirational short notes, including “Africa and Leadership” which was published by Modern Ghana. He is known for his strong zeal for writing, creativity and social change. In 2017, his first book, The Power of Decision: Your Destiny Lies in Your Decisions was published, and was unpublished in 2019 with undisclosed reasons. He has authored other books. In 2019, he self-published his resounding book, Decide Your Future, and Knowing Your Relationship Status in 2020.

Professional Membership: He is a member of National Institute of Marketing of Nigeria (NIMN).
Favorite Quote or Personal Motto

“Life is like the pages of a book. You are free to read any page of your choice but remember, your success or failure depends on the page you have read.”