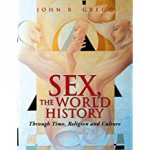 
Sex, the World History; Through Time, Religion, and Culture by John R. Gregg, is a daring exploration of human sexuality from the ancient to the modern world. The book revamps the History of Sexuality

A cross-cultural examination of sexual beliefs, the book traces sexual practices, the unusual and the transcendent, throughout the worlds’ cultures. A deep look at world religions and their control of sex, the book explores complex relationships between spirituality, sexuality, and the treatment of women throughout history. The book revamps previous historical interpretations of gender fluidity in worldwide cultures.

While women were exalted as leaders and priestesses in many cultures, they suffered a drastic loss of power and prestige over time. The supremacy of the Mother Goddess throughout most of human existence, and her relatively recent fall, is detailed.

Other themes are; the existence of bisexuality in the majority of human cultures, the influence and abuses of the Church, the history of sexual slavery including World War II, child brides and forced marriages, historical perspectives on homosexuality, the origins of the LGBTQ and Feminist movements..

Sex The World History; Through Time, Religion and Culture, Volume 3, Sex in the Modern World, 17th to the 21st Century Europe, and colonial North and South America
Website #1
http://http//sextheillustratedhistory.com
YouTube
https://sextheillustratedhistory.com/
Location (city/state/country)
Santa Cruz, CA
Author bio
John R. Gregg, B.A.,M.E.,ED.S.,D.D. historian, writer, researcher, educator, traveler, has had a lifelong fascination for the beliefs and practices of peoples worldwide.
He has taught World Civilization, Anthropology, American History, and Native American History and Culture, at the University of Florida, University of North Florida, and other universities. He has lived, worked and travelled extensively in Asia, and North and South America , studying religious and cultural practices throughout the world.

Professional Speaker Topics
Sex in Rune,
Sex in Greece,
Sex and the Medieval Church,
Sex and Tantra in India
, Sex in Japan,
Sex in China
Favorite Quote or Personal Motto

Why should I be ashamed to describe what nature is not ashamed to create.:Arentino, 1557