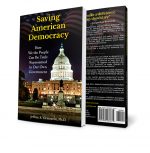 Genre
Authors
Most Recent Book Title
Saving American Democracy
Book Description
A political scientist's analysis of why this nation's democracy is under siege and what we can do about it.
Additional Book Titles
Fixing American Government, Contemporary Issues in Political Throery, U.S. Rail Policy and others.
Website #1
https://SavingDemocracyUSA.com
Amazon Page
https://www.amazon.com/Jeffrey-R.-Orenstein/e/B001HON618%3Fref=dbs_a_mng_rwt_scns_share
Facebook
http://facebook.com/jeffpublisher
Twitter
http://@jeffpubblisher
Location (city/state/country)
Sarasota, Florida
Author bio
Jeffrey R. Orenstein earned his B.A. from Ohio State University in
Columbus, Ohio, and an M.A. and Ph.D. from the University of Wisconsin-
Madison, all in political science.

His first career was in education, starting as an Assistant Professor of
Political Science at Kent State University in Ohio in the 1970s and taking
an early retirement as a full professor 25 years later.

His post-retirement career has been as a freelance journalist, author and political activist.
He was the founder and co-publisher (with his wife) and executive editor of
Living On The Suncoast Magazine for a decade, and has been the executive
editor of The Gulf Coast Business Review and Around The Ranch in Sarasota.
He co-authored a 2013 book on self-publishing and has written numerous articles on transportation and technology issues for national magazines. He and his also publish a monthly column distributed in six states called Simply Smart Travel.

He has been a candidate for public office, campaign volunteer and has managed political campaigns in Ohio and Florida.

He and his wife, Virginia, live in East Manatee, Florida.