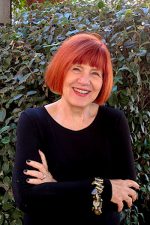 Joan has lectured extensively on historic Los Angeles crime for various groups and organizations including two California Association of Criminalists seminars. She has made dozens of appearances as a featured crime expert in TV true crime series such as: Deadly Women; Evil Kin and Horror at the Cecil Hotel, and she appeared in several episodes of the Hollywood and Crime podcast.

In April 2018 Joan’s book, The First with the Latest!: Aggie Underwood, the Los Angeles Herald and the Sordid Crimes of a City was selected by the LA WEEKLY for its list of top 10 true crime books about the city. She was an integral member of the team that produced the book L.A.P.D. ’53, co-authored by novelist James Ellroy and Glynn Martin (LAPD retired). The book spent four weeks on the Los Angeles Times’ Bestseller list. She is currently working on a book of true crime tales and spends time as a volunteer archivist/consultant for the Los Angeles County Sheriff’s Department Museum.

Two people can keep a secret, if one of them is dead.