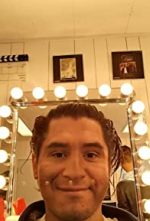 Genre
Authors
Most Recent Book Title
Platforms: Recognizing Your Talents & Furthering Your Cause
Book Description
(work in progress)
Website #1
Ricardo Soto
Website #2
Ricardo Soto, IMDb
Blog
Platforms: Recognizing Your Talents & Furthering Your Cause
LinkedIn
Rick Soto, LinkedIn
Facebook
Ricardo Santiago Soto, Facebook
Twitter
Ricardo Santiago Soto, Twitter
Location (city/state/country)
Buellton, California, USA
Author bio
Ricardo Santiago Soto is a film actor, photographer and writer. Mr. Soto is a fine artist having won (10) fine art, (7) photography, (10) journalism, and (15) screenwriting award(s). He won a talent show competition in elementary school and has trained in vocal techniques, as well as, acting at Santa Barbara City College (SBCC). He was cast in a film in his first ever audition. Ricardo's film acting credits include 'Where Dreams Rest' (2018), and 'Miranda's Marionettes' (2019). He received an associate of arts in liberal arts and sciences with an emphasis in behavioral and social sciences (AA) degree from SBCC '15. In addition, he received his bachelors of science in business administration (BSBA) degree from Capella University '12. Also, Ricardo received his master of business administration (MBA) in finance degree from Aspen University '20. Mr. Soto is a lifetime member of the Golden Key International Honour Society. Ricardo is a member of Broadcast Music, Inc. (BMI), International Documentary Association (IDA), International Screenwriters' Association (ISA), Los Angeles Center of Photography, and National Association of Hispanic Journalists (NAHJ). He runs PublicistWire, which is a division of MultiTalent Management Incorporated. Rick was appointed into Lexington Who's Who (2001), Empire Who's Who (2004 / 2005), and Cambridge Who's Who (2008).