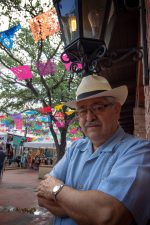 The boat’s crew was personally congratulated and awarded the Vietnamese Cross of Gallantry Medal by Premier Nguyễn Cao Kỳ and Chief of State Nguyễn Văn Thiệu for the capture of a North Vietnamese resupply trawler. He served on the Board of the Swift Boat Sailors Association from 1995 to 2013, for the last six years as president.

As a freelance writer he has written for Vietnam magazine and Viva! magazine, a supplement to the former Houston Post. He has been a board director and contributing writer for Nuestras Vidas magazine, an English-written periodical featuring stories of successful Hispanics in Houston, Texas. Sea Classics magazine published his “Victory at Sa Ky River” article in their February 2016 issue. Swift Boat skipper Guy Gugliotta and Herrera co-authored “Skunk Alpha,” an article commemorating the 50th Anniversary of the Sa Ky River Victory. It appeared in the July 14, 2017, issue of the New York Times.

The author was selected as one of the top ten national finalists in the Books for Life Foundation, New Voices in Literature Awards in 2003. He also contributed historical research for Medal of Honor—A Vietnam Warrior’s Story (M. Sgt. Roy P. Benavidez, SF, Ret.).

The Skunk Alpha incident has been featured in four books: Brown Water, Black Berets by Thomas J. Cutler; They Answered the Call: Latinos in the Vietnam War by Gil Dominguez; White Water Red Hot Lead by Dan Daly; and, War in the Shallows by John Darrell Sherwood.

The author was given special credit on the VHS video jacket of Swift Boats—Brave Sailors for his personal film footage contribution of the captured enemy vessel. As part of the dedication of the Texas Capitol Vietnam Veterans Monument on March 29, 2014, Herrera’s oral history can be found on their website in the Veterans Stories Segment. An oral history interview of the author also appears in the United States Navy Memorial website. In addition, two CBS Affiliate KHOU-TV interviews have aired in the past. Recently, the University of Texas at Austin Voces Oral History Program invited the author to and in-depth oral history interview.