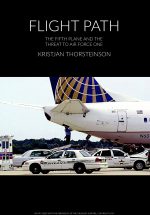 Genre
Authors
Most Recent Book Title
Flight Path: The Fifth Plane and the Threat to Air Force One
Book Description
Positively identifies a fifth plane used by AL-Qaeda on the morning of September 11, 2001. Reveals the true nature of the threat to Air Force One that day. Makes sense of the present through a careful examination of the past; Flight Path sheds new light on the current spying scandal in Germany. Why was the city of Frankfurt of particular interest to United States investigators?

In late August, 2001 a "Middle Eastern man" on board a Continental Airlines jet flying from Newark, NJ to Frankfurt, Germany brandished a box-cutter, threatening the passengers and crew (Obtained from an unknown, recently declassified FBI-302 document). After finally being restrained his carry-on luggage was found to contain "multiple box-cutters." After the plane landed in Frankfurt, security officials at Newark were never notified of the incident. Flight Path not only reveals this story for the first time, it successfully connects this incident to yet another Continental Airlines jet departing from Newark that was found on 9/12/01, vandalized with a message to then president Bush.

Learn for the first time about the very real and credible al-Qaeda threat to Air Force One that morning!

For over a decade, the internet has been awash in ludicrous and often politically reactionary theories surrounding the September 11, 2001 attacks. Flight Path, while jumping directly into the world of espionage, counter-terrorism and "dark networks," puts a premium on the critical and concrete; sound, objective research will give the reader not only a broader view of attacks, it will give them a more global perspective. Refreshingly, the author presents a careful, apolitical narrative that will critically engage the reader.

For only $5, learn more about the attacks of September 11, 2001 than you ever have before from one source. The United States intelligence community's activities in Germany have created an important global dialogue about surveillance and data collection. Now, for the first time, learn the motivations behind their clandestine activities there!