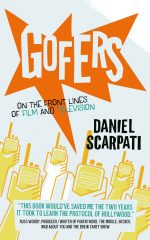 Genre
Authors, Speaker
Most Recent Book Title
Gofers: On the Front Lines of Film and Television
Book Description
Ever hear of an entry-level job where the office moves daily, co-workers change constantly and responsibilities could range from unclogging a backed-up dressing room toilet to cueing the controlled explosion of a spaceship in the middle of a busy city park? Well it's a real job, the title of which is production assistant (PA for short, a.k.a. "gofer").

This is the first position that many people have in the film and television production industry. After working hundreds of overtime hours as a PA, Daniel Scarpati learned that success in showbiz is all about who you don't know! Come behind the scenes of countless sets to hear about the plentiful, sometimes painful tasks PAs are asked to do so the show can go on.

"Gofers" places the entry-level role and hectic lifestyle of a PA in the spotlight. It explains, step-by-step, how Daniel went from making home movies in his backyard and having zero connections to working on dozens of primetime network series, major studio movies and big-budget commercials. Through stories from time spent with renowned cast and crew, Daniel explains how to forge your own path in the industry.

This isn't just another textbook. The street smarts, people skills and practical life lessons can translate to any industry.


"I so wish I had this book when I was first trying to be a writer/producer in L.A. I started as a PA, but this would've saved me the two years it took to learn the protocol of Hollywood."

-Russ Woody, producer/writer of Parenthood, The Middle, Becker, Mad About You and The Drew Carey Show


"'Gofers' is a must read for anyone interested in breaking into the motion picture industry. Full of how to, on-set knowledge, and peppered with anecdotes told through the eyes of veteran PA Dan Scarpati, it is informative, fun, and tells it like it is."

-Tom Reilly, member: the Directors Guild of America, author of "The Hollywood MBA: A Crash Course in Management From a Life in The Film Business"
Website #1
Author Website
Website #2
"Gofers" Book Trailer
Amazon Page
https://www.amazon.com/Daniel-Scarpati/e/B08LMM257L
Facebook
https://www.facebook.com/PassingPlanes
YouTube
https://www.youtube.com/c/IKidYouNot
Location (city/state/country)
Queens, NY, USA
Author bio
Daniel Scarpati is the owner of Passing Planes Productions LLC, where he works as a freelance video producer, director, and editor. He has a B.A. in Film Production and TV/Radio from CUNY Macaulay Honors College at Brooklyn College, is developing his first feature film and (when not on set) is a metal detectorist in search of lost treasure. Keep up-to-date with him online at www.passingplanes.com!
Professional Speaker Topics
- How to find, get hired for and excel in entry-level jobs in just about any industry
- How to make the best of your current job in pursuit of your long-term goals
- Finding and working with mentors to achieve both short and long-term goals
- What it's like working full-time in the entertainment production industry (a.k.a. showbiz)
- Professional film, television and video production (all phases, from pre-production to post-production)
- Working effectively as part of a team of ever-rotating co-workers and bosses
- Quickly developing good working relationships with high-profile personalities
- Sharpening interpersonal communication skills
- Balancing long hours (at least 60 per week) with personal well-being (physical and mental health)
- Effectively managing millennials in the workplace
Favorite Quote or Personal Motto

Learn to master being a "perpetual apprentice" (like Mike Rowe of Discovery Channel's "Dirty Jobs").