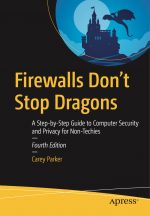 Genre
Authors
Most Recent Book Title
Firewalls Don't Stop Dragons: A Step-by-Step Guide to Computer Security and Privacy for Non-Techies
Book Description
A book on computer security and online privacy for regular, every-day, non-technical people. The book is structured to give you maximum benefit with minimum effort. If you just want to know what to do, every chapter has a complete checklist with step-by-step instructions and pictures. This revised and expanded fourth edition contains more than 170 tips to make you and your family safer.
Website #1
Firewalls Don't Stop Dragons podcast
Blog
Blog
Amazon Page
https://www.amazon.com/gp/product/1484261887
LinkedIn
https://www.linkedin.com/in/firewall-dragons/
Facebook
https://www.facebook.com/Firewalls-Dont-Stop-Dragons-105005911488731
Twitter
https://twitter.com/FirewallDragons
YouTube
https://www.youtube.com/channel/UC0aUElaV7hDubXSpDJkiSrA
Location (city/state/country)
Morrisville, NC, USA
Author bio
Carey Parker was born and raised in Indiana, an only child who loved to tear apart his electronic toys and reassemble them in interesting ways. He began programming computers in middle school when personal computers were just starting to become popular. For years, these twin interests percolated until he attended Purdue University and he learned you could get paid to do this stuff – it was called Electrical Engineering! After obtaining a bachelor’s and a master’s degree in EE, Carey launched his career in telecommunications software development at Bell Northern Research (aka the “Big Nerd Ranch”). Over the next 23+ years, Carey wrote software for multiple companies, large and small, and lived in various cities across the southern United States. In recent years, particularly after the Edward Snowden revelations in 2013, he became deeply concerned about computer security and online privacy. In 2014, he combined his passion for computers, cyber-security and fantasy novels with the long-time desire to write a book: Firewalls Don’t Stop Dragons. As of October 2020, Carey has retired from the rat race of the 40-hour work week and is now focused on writing more books, writing software apps, and advocating for privacy protections.
Professional Speaker Topics
Cybersecurity, Privacy
Favorite Quote or Personal Motto