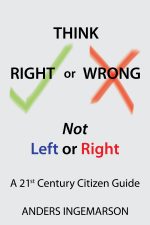 Genre
Authors, Speaker
Most Recent Book Title
Think Right or Wrong, Not Left or Right: A 21st Century Citizen Guide
Book Description
Asserting that you have the moral Right to be in control of your life, "Think Right or Wrong, Not Left or Right: A 21st Century Citizen Guide" advocates that neither today’s political left nor right have your best interests at hand. The book shows why the traditional political left-to-right spectrum presents you with two false alternatives, and that politics instead should be viewed through a morally Right-to-Wrong lense. It explains “the moral groundswell” required for change to take place, and concretizes how we may get from here to there with examples from health insurance and healthcare, retirement planning, and education. Finally, the book offers you a blueprint for affecting change that will move society towards giving you, your children and your grandchilden more control of your life.
Website #1
https://21centurycitizenguide.com/
Blog
https://21centurycitizenguide.com/blog/
Amazon Page
https://www.amazon.com/Think-Right-Wrong-Not-Left/dp/B08RH34WV8/ref=tmm_pap_swatch_0?_encoding=UTF8&qid=&sr=
Facebook
https://www.facebook.com/ThinkRightOrWrong
Twitter
https://twitter.com/AIngemarson
Location (city/state/country)
Colorado, USA
Author bio
Anders Ingemarson was born and raised in Sweden. He immigrated to the United States in 1994 and became a U.S. citizen in 2002.
He has a B.A. in Economics, Finance, and Administration from Stockholm School of Economics and an M.Ed. in Montessori PreK-K Education from Loyola College in Maryland. He is a graduate of the freedom-focused Leadership Program of the Rockies.
Anders has spent his professional career in management and specialist positions in finance, operations, and information technology with multinational companies in the agrochemical, retail, education, and telecommunications industries.
Anders is a champion of individualism, individual rights, limited government, and capitalism. He is the COO (Chief Opinionated Officer) of SEPARATE! (separatestateandtheeconomy.com), where he is a frequent contributor. He has also written for the Federalist, American Spectator, Townhall, Heartland Daily News and The Objective Standard, and he is a regular guest on radio and TV. Think Right or Wrong, Not Left or Right: A 21st Century Citizen Guide is his book debut.
Anders resides in Colorado with his wife of 25 years, Maria.

Anyone who fights for the future, lives in it today.