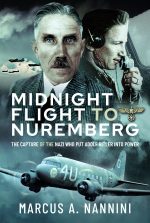 Genre
Authors, Speaker
Services Offered
I author multi award-winning biographies. My fees begin at $15,000 for a magazine suitable piece to $200,000 for 80,000 or more words suitable for book publishing. Fees are payable in 2 or 3 installments, depending on the time involved on my part. If you are interested, look me up on LinkedIn: https://www.linkedin.com/in/marcus-a-nannini-65b949160/ or email me: MarcusNannini@aol.com
Most Recent Book Title
MIDNIGHT FLIGHT TO NUREMBERG
Book Description
February 4, 2022-BOOKLIFE REVIEW

Nannini, author of Left for Dead at Nijmegen, takes flight in this gripping account of courage in the air, the story of pilot Harry E. Watson, who flew 27 combat missions in World War II and was the recipient of seven Battle Stars and three Air Medals. Nannini, who interviewed First Lieutenant Watson extensively, opens this vivid account in the thick of the war, with the tense tale of Watson, already celebrated for his skill at bad-weather piloting, being tasked to fly “a plane-load of Jerry cans”—that’s fuel— to General Patton’s troops near the French city of Reims, on the front lines, “so they don’t get themselves massacred” by the Germans. The fog’s a beast, and there might be wounded to ferry back, and the adventure that follows will involve Mark IV tanks, 800 German troops, and French champagne in a foxhole.


Nannini proves adept at war-time storytelling, with an emphasis on bravery and camaraderie; his accounts of Watson’s missions take an engaging novelistic approach, with memorable detail—the C-47s Watson flies, the “hot chow” the crews scarf, the rituals a superstitious pilot works into his routine—and a feeling for suspense. On a mission to evacuate a field hospital in danger of being overrun by the SS (from the mission briefing: “get ’em all the hell out of there”), the sight of a German Messerschmitt 262 jet fighter stirs in Watson and readers both a mesmerized awe and then deep alarm.

This inviting volume reads quickly, building to the top-secret, behind-enemy-lines mission of the title—"You’re picking up some top Nazis, and they won’t be happy about it, understand?”—rendered with clarity and power. Nannini excels at establishing the stakes, explaining crucial context like flight conditions, and putting readers alongside Watson in the cockpit. The reconstructed dialogue tends to be upbeat, sounding, perhaps, like Watson’s own voice, sharing these stories. It’s a pleasure to have them set down. The striking photographs offer welcome context.
Takeaway: The high-flying accounts of an American pilot’s daring World War II missions.
Great for fans of: Adam Makos’s A Higher Call: An Incredible True Story of Combat and Chivalry in the War-Torn Skies of World War II, Guy Gibson’s Enemy Coast Ahead.

Additional Book Titles
Left for Dead at Nijmegen, the 2019 Nonfiction book of the year and 2020 Nonfiction book of the year/History.
Chameleons, an Untold World War II Story, awarded "Best Thriller" in 2017.
Website #1
https://chameleonsthebook.com/marcus-a-nannini-2/
Website #2
https://chameleonsthebook.com/midnight-flight-to-nuremberg/
Amazon Page
https://www.amazon.com/s?k=marcus+nannini&ref=nb_sb_noss
LinkedIn
https://www.linkedin.com/in/marcus-a-nannini-65b949160/
Location (city/state/country)
Tucson, Arizona, USA
Author bio
In the sixth grade, Mr. Nannini began his writing career publishing a newspaper. His parents did not have a copier, so he charged 25 cents per school quarter for the privilege of reading the only hand-written copy of each edition. The newspaper was a modest success and planted the seed he might one day make a living through writing.

He was a paid newspaper reporter during his undergraduate years and worked three semesters as the Research Assistant to journalism professor Richard Stocks Carlson, Ph.D. Carlson advised him to write as conversing with his readers, not speaking to them.

Nannini is a life-long history buff with a particular interest in World War II and the Japanese attack on Pearl Harbor. He once discovered an error in his fifth-grade history book concerning the attack, which the publisher subsequently corrected. His first novel, Chameleons, An Untold World War II Story, was well received and awarded “Best Thriller” by International Thriller Writers.


Nannini’s second work, Left for Dead at Nijmegen, the True Story of an American Paratrooper (Casemate Publishers, Oxford, UK, and Philadelphia, PA), received plaudits from around the world, has been placed in the United States National Archives, and was named 2019 Nonfiction Book of the Year. 2020 IAN Best Nonfiction Book of the Year-History Category. Sir Charles, Prince of Wales, owns a copy.

Nannini’s third work, Midnight Flight to Nuremberg, the Capture of the Nazi who put Adolph Hitler into Power, was released in the UK and EU on September 17, 2021, by Pen & Sword Books (Yorkshire, United Kingdom, and Philadelphia, PA) and the USA and Canada in November 2021. On March 7, 2022, Midnight Flight was awarded the Overall Grand Prize for Nonfiction, 2021-2022.

Nannini is presently working on the biography of an impoverished Italian immigrant who rose to a Captain of Industry and International Philanthropist. The anticipated publication date is the fourth quarter, 2023.

“Every morning we are born again. What we do today is what matters most.
Nothing ever exists entirely alone; everything is in relation to everything else.
Every human being is the author of his own health or disease.
If you are facing in the right direction, all you need to do is keep on walking.”
Gautama Buddha