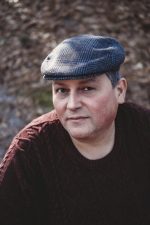 Genre
Authors, Speaker
Most Recent Book Title
Dragged Into the Light: Truthers, Reptilians, Super Soldiers, and Seath Inside an Online Cult
Book Description
Internet prophet Sherry Shriner told acolyte Steven Mineo that Barbara Rogers (Steven’s girlfriend) was going to destroy him. It caused a rift within the cult and an online flame war over whether or not Barbara was a witch. Then, two months after the initial falling out, Steven was dead and Barbara was charged with his murder.
Dragged Into the Light looks into conspiracy theory cults with an emphasis on the political and religious divisions that drive them. I'm featured in ViceTv's The Devil You Know Season Two, a six-episode series about the same cult.
Additional Book Titles
Delaware Beer (History Press), Eastern Shore Beer (History Press)
Website #1
Dragged Into the Light
Website #2
A Bagel Manifesto
Blog
Medium Page
Amazon Page
https://www.amazon.com/~/e/B00O1436TI
LinkedIn
https://www.linkedin.com/in/ossurynot/
Facebook
https://www.facebook.com/ByTonyRusso/
Twitter
https://twitter.com/ByTonyRusso
Location (city/state/country)
Delmar/MD/United States
Author bio
Telling compelling stories about ordinary people has been Tony Russo's specialty for the entirety of his journalism career. Whether profiling artists, community leaders, or combat veterans, he has a knack for helping people connect to personal stories.
After nearly 20 years covering news and writing features for local outlets, Tony moved into independent journalism, telling stories about how small events affected the larger culture.
In addition to writing about the craft beer revolution, Tony wrote and hosted "This Is War" a narrative podcast documenting the personal stories of combat veterans who served in Iraq and Afghanistan.
His most recent work, Dragged Into the Light: Truthers, Reptilians, Super Soldiers, and Death Inside an Online Cult looks into how one nondescript woman was able to tap into the rising paranoia that birthed the conspiracy theory culture.
Tony lives on Maryland's Eastern Shore with his wife and the only of his four daughters who has yet to move out. Together they keep their dog and cats comfortable.
Professional Speaker Topics
QAnon, conspiracy cults, religion in the media