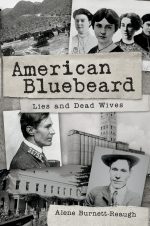 Genre
Authors
Most Recent Book Title
American Bluebeard; Lies & Dead Wives
Book Description
The book was inspired by a story my Cornish Grandmother told the family about the disappearance her Cornish Aunt Beatrice Maud Roscorla Andrewartha. My Great Grandaunt Beatrice disappeared in 1919 shortly after marrying a man she met on a train. The scandal of murder was a smudge on the respectfulness of the family, so it became a family secret. I have now exposed this secret and put this story to rest.

This is the story of an American Bluebeard whose crimes at the turn of the twentieth century involved over fifty women. The story reveals the plight of his victims and the fate of the fiend that cruelly annihilated them
Website #1
http://www.alenereaugh.com
Location (city/state/country)
Siletz, Oregon, USA
Author bio
Alene Lorraine Burnett-Reaugh was born in Tacoma and grew up in Bellevue, WA. She studied Psychology at the University of Washington nights while workings full time as a Claim Investigator, a career spanning 40 years until she retired in 2013. She has a personal stake in telling this story. Her grandmother Lorraine’s Cornish aunt, Beatrice Maud Roscorla Andrewartha, disappeared in 1919 shortly after marrying a man she met on a train. This is Alene’s first book.