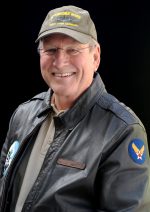 Genre
Authors
Most Recent Book Title
SHOT DOWN: The true story of pilot Howard Snyder and the crew of the B-17 Susan Ruth
Book Description
Set within the framework of World War II in Europe, SHOT DOWN is about the experiences of each member of a B-17 crew after their plane was knocked out of the sky by two German Focke-Wulf 190 fighters over the French Belgian border and about the courageous Belgian patriots who risked their lives to help them. The print edition of the book has more than 200 time period photographs of the people who were involved and the places where the events took place.
Website #1
http://SteveSnyderAuthor.com
Blog
http://SteveSnyderAuthor.com
Amazon Page
http://bit.ly/ShotDownBook
LinkedIn
http://bit.ly/ShotDownAuthor
Facebook
http://bit.ly/SteveSnyderAuthor
Twitter
https://twitter.com/uclasny
Pinterest
http://pinterest.com/uclasny
YouTube
https://www.youtube.com/channel/UCkVueBkdhWGBm2yipMxebkA
Location (city/state/country)
Seal Beach, CA/USA
Author bio
Steve graduated from UCLA with a B.A. degree in Economics and has lived in Seal Beach, California since 1972. After 36 years in national sales and sales management, he retired from Vision Service Plan (VSP) in 2009.

Soon after retirement, Steve began his quest to learn about the World War II experiences of his father, pilot Howard Snyder, and his crew of the B-17, Susan Ruth, named after his older sister. It became his passion and has resulted after several years of dedicated research in his book, Shot Down. One result of his new career as a World War II historian is that he is a member of numerous World War II associations and is Vice President of the 306th Bomb Group Historical Association.

In 1994, he traveled to Belgium for the 50th Anniversary of the Liberation of Belgium with his parents and then again in 2004 for the 60th. His attendance at the 70th Anniversary Celebrations in 2014 marked the official European launch of Shot Down.

Don't Give Up. Don't Ever Give Up.