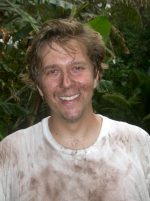 From the author of a lot of emails and several Facebook posts, a laugh-out-loud, true story of how a quarter-life crisis led to adventure, freedom, and love on a tiny island in the pacific.

In his mid-twenties, Alex Sheshunoff had his own internet start-up and had made national news. But he was also burnt out. So he bought a one-way ticket to Yap, giving up everything he was supposed to want in search of paradise and all the things he never knew he needed.

Along the way, he answered some important questions - about making big choices and big changes, about focusing on what you actually care about - and some less essential ones too, including: :

Now, Alex shares his incredible story in a book full of surprises, laughter, unforgettable islands like Yap and Pig, and (pretty) hard-won wisdom that maybe, just maybe, will convince you to find your own little place in the sun. Either that or show you that staying home was the best choice all along.

Website #1
http://www.abeginnersguidetoparadise.com
Website #2
http://www.notthesharpesttool.com
Facebook
http://www.facebook.com/asheshunoff
Twitter
http://www.twitter.com/alexsheshunoff
Pinterest
http://www.pinterest.com/asheshunoff/
Location (city/state/country)
California
Author bio
Alex Sheshunoff is a writer-like person whose work has appeared in National Geographic Adventure, Slate.com, Marketplace on National Public Radio, The Anchorage Daily News and other, very, very prestigious media outlets. Before deciding to call himself a writer, Alex snuck through Yale and started and ran an internet company in New York called E-The People - a nonpartisan precursor to Moveon.org but with a pun in its name.

Five years later and burnt out and facing a quarter-life crisis, Alex gathered the one hundred books he was most embarrassed not to have read in college and moved to a small island in the Pacific called Yap. He later wrote a book about the experience (A Beginner’s Guide to Paradise) and got to rewrite the book after getting a masters degree in creative nonfiction writing from the University of Iowa.

Because of his unique last name, Alex is often asked if he's somehow related to Ian Shenanigan Sheshunoff, the first-place winner of the Diaper Derby Crawling Contest at the 2008 Alaska State Fair. They are indeed related. Ian is his son. Today, Alex and his wife, Sarah, live in Ojai, California with Ian and his equally talented younger brother, Andrew Commissioner Sheshunoff.

Professional Speaker Topics
Writing. Landing a dream job. Why not to auction the naming rights to your son's middle on Ebay. And, of course, how to make a turkey sandwich using only your toes.

As my grandmother used to say, "Put two goats in a corral and eventually they'll fall in love."