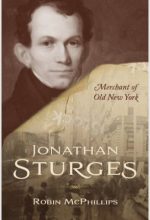 Genre
Authors
Most Recent Book Title
Jonathan Sturges, Merchant of Old New York
Book Description
Biography of a man from Fairfield, CT, with family roots in America went back to the 1630's. From humble economic conditions he went to nearby New York, obtained a clerk position in a leading tea and coffee merchant house, and in just over a decade became the head of the firm and a nationally recognized businessman. He went on to become a founding investor and board member in building the New York-New Haven and Illinois Central Railroad, the Bank of Commerce as well as philanthropic pursuits which still exists in New York's Hospital for Special Surgery and New York Presbyterian. His influence and efforts in supporting the Union war efforts was significant and he personally dealt with the leading Union generals and multiple Presidents and Mayors of New York.
Website #1
http://www.jonathanstrges.com
Amazon Page
https://www.amazon.com/Jonathan-Sturges-Merchant-Old-York/dp/0998037915/ref=sr_1_3?dchild=1&keywords=jonathan+sturges&qid=1629917629&sr=8-3
Location (city/state/country)
Hilton Head Island