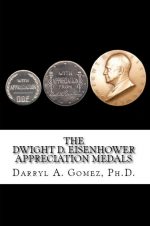 Genre
Authors
Most Recent Book Title
The Dwight D. Eisenhower Appreciation Medals
Book Description
For over five decades the numismatic history relating to the Dwight D. Eisenhower appreciation medals has been held from the public eyes. This lack of information resulted in disinterest within the numismatic community causing the decimation of its population at smelters. This book reveals the lost history of these medals by exposing its past through recently released US government records.

The development of the Dwight D. Eisenhower appreciation medal series was initiated by the White House and executed by the Treasury Department though the US Mint in Philadelphia. This development path effectively employed the talents of the US Mint for the White House. In essence, these medals were created specifically for President Eisenhower's discretionary use as President of the United States of America (POTUS). A medal was presented to an individual as an expression of his appreciation and is a keepsake reminder of this appreciation for the recipient. In all, a total of 9,858 medals were struck by the US Mint in Philadelphia from September 1958 to October 1960.This book catalogs the seventeen medals in the Dwight D. Eisenhower appreciation medal series for identification and identifies its rarity through mintages and witnessed destruction. It also identifies several medal designs whose development was cancelled, such as USSR, Philippines, Taiwan, and State of Alaska.

The Dwight D. Eisenhower appreciation medal series is composed of seventeen medals in three different diameters: 30.6 mm (US half dollar size), 38.1 mm (US silver dollar size), and 76.2 mm (medallion size). For each diameter size, a common obverse design is used. The reverse design was changed on an as needed basis such as year, event, or location. The 30.6 mm and 38.1 mm medals were struck on US half dollar and US dollars silver planchets. On one occasion, the 38.1 mm was struck in gold for special presentation.