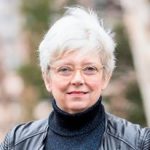 Genre
Authors, Speaker
Services Offered
Speaking
Most Recent Book Title
Fag Hags, Divas and Moms: The Legacy of Straight Women in the AIDS Community
Book Description
The history of the AIDS epidemic has largely been told from the perspective of gay men: their losses, struggles and contributions. But what about the women - in particular, straight women? Not just Elizabeth Taylor and Princess Diana, but thousands whose accomplishments have never been recognized?

For almost forty years, straight women have have been affected by HIV/AIDS. They have fought for the right to be included in clinical trials and qualify for disability benefits. They have raised money and awareness. They have devoted their lives to caregiving, medical research and advocacy. But until now, their stories have been ignored or forgotten, even in accounts of women's history.

Drawing on personal interviews and archival research, Fag Hags, Divas and Moms: The Legacy of Straight Women in the AIDS Community is the first book to share the stories of these women around the world, throughout the epidemic. Some of the names are familiar; most are not. But all have left a lasting impact on the fight against a virus that has killed over 40 million people around the world, half of them women.

In the spring of 2006, I was deep into my third career as an educational sales rep to Chicago Public Schools, a business that allowed me the flexibility I needed after our daughter was born in 1994. At a coffeehouse around the corner from her school, over our usual green teas, I told my friend Delle Chatman that I had an idea for a book: stories of people who were grieving the death of a friend. As always she was supportive and enthusiastic, despite the fact that I’d never written a book before. She was also in remission from ovarian cancer. Six months after that conversation, she died.

It took a while to keep my promise. Now and then I’d hear her voice: “You wouldn’t have to worry about that if you’d write the damn book.” After a few false starts, I finally got serious in 2009, after a concussion ended my sales career. It was a steep learning curve, but I loved interviewing people who wanted nothing more than to honor friends whose lives impacted their own. I broke up the book into a series of six small ones, which became the Friend Grief series. At the time the first ones were published in 2013, there was little written about this kind of grief. The response was gratifying, and I assumed when the series finished that my writing career would be over. I was wrong.

I ran into Tracy Baim, publisher of Windy City Times, Chicago’s weekly LGBT paper, in the summer of 2011. To honor the 30th anniversary of the AIDS epidemic, she was running weekly essays from people in the community. She asked me to write one, too, about my experiences in the late 1980s-early 1990s. I was skeptical about whether I would even remember much; I’d burned out in 1994 when our daughter was born. But again, I was wrong. As soon as I sat down at the computer, the memories surged along with the emotions: loss, frustration, rage. That’s when I knew one of the books in the series would be about friends lost to AIDS.

That book brought me back to the AIDS community, not as a fundraiser this time, but a writer and activist. I soon found myself joining ACT UP/NY and participating in actions. My essay, “Long Term Survivor”, about those of us who lived through the dark, early days of the epidemic, won the 2015 Christopher Hewitt Award. I began writing and speaking about the emotional challenges faced by long-term survivors. But I still believed my writing career was winding down.

After listening to a panel presentation by the women of ACT UP/NY in 2015, I realized that the extensive literature of the AIDS epidemic ignored the accomplishments of women. And though some have acknowledged the critical involvement of lesbians, especially in the early years, none had focused on straight women. So, I went back to work.

In 2019, Fag Hags, Divas and Moms: The Legacy of Straight Women in the AIDS Community gave long-overdue recognition to women around the world who have changed the course of hte epidemic, largely in obscurity. Like my other books, it was built on a solid base of personal interviews and archival research. And it forced me to tell my own story, too. It has been one of the great joys of my life to introduce these women to the world.

In late 2020, I started on a new book. I thought it would be a reworking and updating of the Friend Grief series, adding a few stories about COVID. But it's evolved into a book just about people grieving friends lost during - but not only as a result of - COVID. You'll be hearing more about this soon.