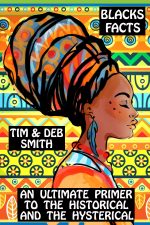 Most Recent Book Title
Blacks Facts ~ An Ultimate Primer to the Historical and the Hystericcal
Book Description
From the city of North Star publisher Frederick Douglass, this delightful survey of Black accomplishments also reminds us that humor has helped African Americans survive 400 years of oppression. I can see that the book will be very helpful for students, teachers and families in particular. ~ Jennifer Leonard,
President & CEO, Rochester Area Community Foundation

This is indeed the “ultimate primer,” a masterful and lovingly written book on two distinct threads of Black culture in America. Never before has this approach been taken on these topics. There are books on Black humor and there are books on Black history, but no one has ever attempted to merge those two threads through the eye of a single needle. And the Smiths have accomplished this with pinpoint precision. The wonderful thing about this book is that it collects into one volume the 400 funniest jokes and stories ever told by Black comedians.

Amazon Page
https://www.amazon.com//Blacks-Facts-Ultimate-Historical-Hysterical/dp/1938465148/ref=sr_1_1?crid=1BXDWS3IS1J74&keywords=blacks+facts+tim++deb+smith&qid=1642702947&s=books&sprefix=stripbooks126&sr=1-1
YouTube
https://youtu.be/TsvqBMLjNiY
Location (city/state/country)
Mendon, New York, USA
Author bio
We have a rather unique back story, most of which is set in upstate New York. We met on the first day of high school, brought together by the merger of two neighboring school districts. We ended up dating for all four years of high school, then went to different colleges and, as fate would have it, we ended up not seeing each other again for literally 40 years.
Tim’s mom passed away a few years ago and Deb heard about it through the grapevine in Virginia Beach where she was teaching. She sent him a sympathy card, he wrote back, one thing led to another and Tim ended up coming down to Virginia Beach at the end of that school year to pick Deb up and bring her back home to New York.
The thing Deb remembers most from that courtship period when she was in Virginia, but longing to be back in New York, was that every day at school when she went to her mailbox, there was an envelope from Tim. And each one contained an original letter Deb had written to him 40 years ago. He had saved every one. His go-to line regarding that part of the story is to say, “Yeah, it took me a long time to play those cards!” Sometimes the best things in life are worth waiting for.
We got engaged on Deb’s mother’s birthday (December 4) and we got married on Tim’s mother’s birthday (June 12). Because we both have Native American ancestry, we had the ceremony performed at the Ganondagan Historic Site by the Native American leader there, as well as a former student of Tim’s.
So how did we get into this writing gig? Well, as fate would have it, we happen to live right next door to the newspaper office in our town. After hearing some of our stories, the publisher of the paper, Chris Carosa, suggested we write about our background and share it with the community. So we started by telling the personal story of our relationship, and we haven’t stopped writing since. Currently our weekly feature comprises the entire back page of the Mendon-Honeoye Falls-Lima Sentinel and we have now upped our production to include two more columns within the paper. Contributing to the community is a passion of ours.
We write about an eclectic variety of topics including entertainment, sports, travel, history and human interest. Chris Carosa, who we mentioned above, had been encouraging us to write a book since we first began writing for the paper. That first book came to fruition with the publication of The Beatles, The Bible & Manson: Reflecting Back with 50 Years of Perspective during the summer of 2019.
We followed up in 2020 with Tit For Tat Exchanges ~ Tim & Deb’s Greatest Hits and in 2021 with What’s in a Name ? ~ Your Geography Hall of Fame, both of which we described in the “Acknowledgements” component in the beginning of this book. And at this point we hope you’ve just finished Blacks Facts ~ An Ultimate Primer of the Historical and the Hysterical and have enjoyed it so much you’ll be interested in checking out the rest of our work.