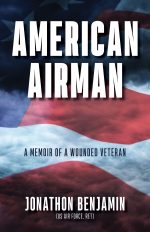 Genre
Authors, Speaker
Most Recent Book Title
American Airman, a memoir of a wounded veteran
Book Description
Since 9/11, over 30,000 veterans have died by suicide — 4x the number of U.S. military
personnel who’ve died in combat in Iraq and Afghanistan. American Airman is about a
veteran channeling his pain into a new life purpose. It tells a life story from enlistment to
a near fatal injury while on active-duty and then through transitioning into civilian life.
American Airman is a story of vulnerability and resiliency. It bears witness to the men
and women who, in fighting for our rights and freedoms, make unimaginable sacrifices
and then must search for a new normal after sacrifice becomes reality.
Additional Book Titles
Falling Leaves
Website #1
New Play Exchange
Website #2
Goodreads
Amazon Page
Amazon
LinkedIn
LinkedIn
Facebook
Facebook
Instagram
Instagram
Location (city/state/country)
Seattle/Washington/USA
Author bio
Jonathon Benjamin is an author and playwright. He studied at George Washington University in Washington, DC. Having grown up in an Army family, it he enlisted in the Air Force. But, after a nearly fatal accident, he retired, having served 5 years, 12 days and 4.5 hours. He began playwriting as an undergraduate and his first play was produced by the John F Kennedy Center in the Kennedy Center American College Theatre Festival. That play became a book of prose that self-published. Jonathon currently lives in Seattle, Washington and enjoys being back in the Pacific Northwest.
Professional Speaker Topics
Military, Disability, African American History, Theatre
Favorite Quote or Personal Motto