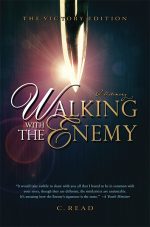 Genre
Authors
Most Recent Book Title
Walking With the Enemy: A Testimony
Book Description
This true story is about the author's involvement with a Bible study group that turned out to be a cult remarkably similar to the Branch Davidians of Waco, Texas, led by David Koresh. As of 28 February 1993, Read had been with them for some three years, and had grown to love and trust the leaders completely; but after she found out the truth about them she could no longer remain. That did not stop them from wanting her back under their control and influence; and her testimony shows how they tried so hard to convince her that they were right, and she was wrong.

Cults are on the rise, and no one is exempt from their evil influences! And even though Koresh was violently removed from this earth over twenty years ago, his "spirit" still lives on in the hearts of some very wicked men.

Reviews:
“Walking with the Enemy is Read’s story of a three-year engagement with a religious cult and the miraculous event that gave her the courage to escape.
…important narrative for any Christian believer, and might be of particular interest to anyone who is a survivor of a religious cult.” –Foreword Reviews

“An inherently fascinating, thoroughly absorbing, candidly personal story…Walking With the Enemy: A Testimony is very highly recommended for personal, church, community, and academic library collections. ...critically important reading for all members of the Christian community regardless of their denominational affiliation!” –Midwest Book Review

ISBN 978-0-9672825-2-7 (E-book)
ISBN 978-0-9672825-9-6 (Paperback)
ISBN 978-0-9672825-7-2 (Hardcover)
Additional Book Titles
Walking in the True Light
Website #1
True Light Publications
Blog
GoodReads Blog
Amazon Page
Walking With the Enemy
Twitter
True Light Public
Location (city/state/country)
Mississippi
Author bio
While C. Read was enlisted in the United States Marine Corps, she committed her life to God in the fall of 1979. Her permanent duty station was in Hawaii, but while she was on a temporary assignment to Yuma, Arizona the Iranian students seized the American Embassy in Tehran, and had taken several American hostages. A special friend was on a six-month deployment to Japan, and he was prepared to go to Iran at a moment’s notice.

That was such an uncertain and distressing time in her life, and as unbelievable as it may sound, Read was actually thankful for the “Iranian Crisis,” because it was that momentous event that caused her to see how greatly she needed the LORD Jesus Christ, her Saviour.

About that same time, a young Marine, whom she had never met before, approached her as she was leaving her barracks in Yuma and handed her a Bible and said, “Here, I think you need to read this.” He just walked away, and Read never laid eyes on him again, but she will never forget him! That brief encounter was a major turning point in Read’s life! She did take his advice, and began reading and studying the Bible, but that was just the beginning of her walk with God…
Favorite Quote or Personal Motto

May the LORD God Almighty be beloved in the eyes of others because of our publications!