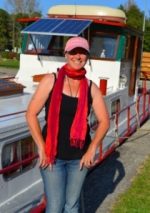 They sold everything they had.

With daring inspiration, Jackie and Noel trained the lost and confused horses, and forced their own unfit bodies to meld into one team.

Life became horses, trail, endurance, and camping: all seven reliant on one another as they trekked along part of Australia’s majestic Bicentennial National Trail.

What started as a dream adventure turned out to be more than they had ever imagined. The beauty of the trail didn’t lessen its dangers; with minimal support and all their worldly possessions on horseback, Jackie and Noel made mistakes and with humour learned the hard way.

They were amateur horse-handlers, tackling an epic challenge, but they created something special, unique, and incredibly endearing.

Fears were faced, healed, and conquered. Bonds were forged.

But did the team of seven that started together, finish together?

Originally from the UK she is now an ‘adopted’ Australian. She’s sailed around the world one and a half times and trekked in the bush with five rescued horses for several months. She has also trained to become a professional maritime captain and teacher.

Currently, she is exploring the European canals on a 1920s Dutch barge with her Australian husband, Noel. She’s written about her sailing and horse trekking escapades, and there is still more to come. Jackie donates 50% of proceeds from her horse trekking book (A Standard Journey – 5 horses, 2 people, and 1 tent), to help rescue more horses.
Professional Speaker Topics
Sailing the world, living on board
Favorite Quote or Personal Motto

Be an encourager, there are far too many critics in the world already.