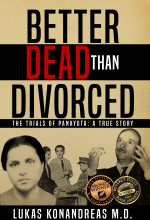 Genre
Authors
Most Recent Book Title
Better Dead Than Divorced
Book Description
“Better Dead Than Divorced” was the answer my aunt Panayota gave to those who knew what her unfaithful husband George was up to. Though they were married for 14 years, he was actively commissioning assassins to kill her.
Though she was aware of the risk, she was in love, she was dedicated, and she was living at a time and in a place that forbade any woman from walking away from a marriage. My father, a cousin of Panayota and her protector, was the most knowledgeable about the danger she was in. Despite his urgings, she did not believe that she was in any danger and kept singing “Better Dead Than Divorced”.
I was an 8 year old boy the night that Panayota was murdered. The gun shots that killed my Aunt were fired near our house and I remember them awakening me. I would later find out that my father had to be held down and convinced not to take the law in his hands that night.
This book is my attempt to chronicle this dark time and the bravery of my father as he struggled to bring justice to the culprits in a court of law. He did so having to face down powerful elements in his community, the financial strength of the husbands’ Greek-American family, and the politically connected murderers. My father risked everything in his pursuit of justice – all of his savings and his very life.
Besides my memories from the events, I used court records, the newspaper articles of the day, and over 150 interviews.

Website #1
http://betterdeadthandivorced.com/
Location (city/state/country)
Stamford CT USA
Author bio
Lukas Konandeas M.D. one of four children, was born at Kupaki,a small mountain village in central Greece.
He finished elementary school there and high school in Athens Greece.
After graduating from the Medical School of the University of Athens, he migrated to Toronto Canada and from there he did Medical training in Chicago and Fresno California. He practiced Emergency Medicine in Sacramento California for about 6 years and from there he moved to Connecticut, where he organized an Urgent Care Center, which he still directs after 30 years.
He is married to Georgia, a Doctor of Psychology and has two sons.