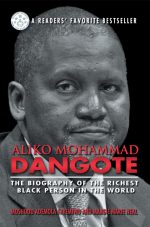 Genre
Authors
Most Recent Book Title
Aliko Mohammad Dangote: The Biography of the Richest Black Person in the World
Book Description
The New York-based Forbes magazine had not deemed it fit to include an African south of the Sahara in its List of World’s Billionaires in its 100-year history until 2008 when the name of Nigeria’s Aliko Dangote appeared worth $3.3 billion. In 2011, Aliko’s fortune jumped to astronomical $13.8 billion, a–544 % increase in the history of wealth creation. Today, this African is the world’s richest black person worth $16.1 billion.
How did he achieve this feat? What were the sources of his wealth? How did a -56-year old half orphan, who grew up in the arid dessert of Kano, northern Nigeria, invest a- $500 loan and turn it into the largest business conglomerate in Nigeria and West Africa in 30 years?

The authors were in Africa for 16 months to investigate the story of this billionaire. The book is purely an independent research and a seminal work by the authors, who managed to resist censorship during their field work, and succeeded in presenting readers Aliko Dangote’s secrets of success which aspiring business people can learn from in the life history of Aliko Dangote, especially on how to start small and grow big. This is the first and only authoritatively-researched and comprehensively-investigated biography of Aliko Mohammad Dangote, the richest black person in the world.

Website #1
http://sbpra.com/MoshoodAdemolaFayemiwoandMargieMarieNeal/
Location (city/state/country)
Chicago, IL USA
Author bio
MOSHOOD ADEMOLA FAYEMIWO was a newspaper publisher/editor in Nigeria where he grew up but now lives in Chicago. He earned B.A. Education/Social Science at the University of Lagos, Nigeria; M.A. Mass Communications (Journalism & Media Studies) from the University of South Florida, Tampa and M.S Information Science, M.A in History & Literary Studies from the State University of New York. His Doctorate is in Public Policy & Administration and he is author of Who’s Who of Africans in America and four published books. He is a member of several professional organizations: Association of American University Professors (AAUP); National Association of Black Journalists (NABJ); Society of Professional Journalists (SPJ); Investigative Reporters & Editors (IRE); American Association of Public Administrators etc. His forthcoming book is; Jonathan; The Squandering of Good Luck.