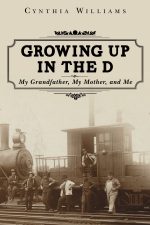 Genre
Authors
Most Recent Book Title
Growing Up in the D: My Grandfather, My Mother, and Me
Book Description


Growing up in the D: My Grandfather, My Mother and Me
Author: Cynthia Williams
The main message conveyed throughout my book reveal the movements and actions made by my grandfather, and show that the love and support you need might not always come from the person you expect to deliver them, but the examples here show that great love can come from another relative or person. One strong adult influence in your life can enrich you.
The sepia shades and back-in-time imagery that tell the reader we are taking a trip with an historical angle. When the book ventures into history itself, the reader gets a multi-faceted, realistic view of those times along with the lesson. The book goes into many historical details, and the reader will appreciate the timestamp as well as the little-known details of those times. Each setting comes alive through the use of sensory details, along with a sense of place, which creates a terrific foundation for the interactions among the characters.
Details of my mother’s mental illness are shared, and I explain it without circling the topic out of pain or fear the impact that this relationship has had on my adult life and ability to connect with and depend on others. The reader will see the strength and heroism in my grandfather, and understand the significant influence he had in my life.
I wrote this book as a tribute to my grandfather and to acknowledge the great personal sacrifices and struggles he lived through so that I could sustain some semblance of normalcy within our family. I also wrote this book as a testament of my early life with a mentally ill parent, the trauma that I experienced that was often overlooked, and how through the close, sustained relationship with my grandfather I developed the characteristics of other resilient children.
This history/memoir book looks through a nostalgic lens and captures some historic times in Detroit as remembered by Robert and Lillian Williams (my paternal grandparents), my parents, and myself. Growing up in Detroit during the 1950s and 1960s, I personally witnessed the advent of the civil rights movement. As I rode the public bus from Northwest Detroit into the inner city to see the beauty of Christmas at Hudson's, it resonated in my soul to see so many young African American men and women living in impoverished neighborhoods.

I saw the surge of energy and industry in Detroit as it became the automobile capital of the world and the lure of the Ford Rotunda in Dearborn with its grand Christmas events, cars of the future and beautiful dolls from all over the world. I experienced the excitement and wild emotion of the Olympia Stadium as it attracted renowned musicians, like the Beatles, from all over the world.

I remember the thrill of taking the Boblo boat to Boblo Island and recall looking up in wonder at the massive Ambassador Bridge as the boat slowly traveled underneath it. I remember the Detroit Tigers playing ball at Briggs Stadium and listening to the powerful voice of Ernie Harwell as they transformed an ordinary summer day into an event that the people of Detroit felt passionate about.
During this time, Detroit local television produced shows such as The Soupy Sales Show, Milky’s Party Time presented by Twin Pines Dairy, The Johnny Ginger Show, and Rita Bell Prize Movie. My favorite show was The Soupy Sales Show, and I proudly wore my Soupy Sales dress with a red-and-white bow tie as I laughed out loud watching Soupy get smacked in the face with a cream pie on a daily basis. I recall spending many hours watching programs, such as John Cameron Swayze, The Ed Sullivan Show, The Lawrence Welk Show, The Linkletter Show, The Lou Gordon Show, Leave It to Beaver, The Twilight Zone, Lassie, The Jack Benny Program, and Alfred Hitchcock Presents.
The Beatles made history while performing at Olympia Stadium and Detroit radio stations were playing Motown Records hits, such as "Dancing in the Street” by Martha and the Vandellas and "Where Did Our Love Go?" by the Supremes.

At a young age, Cynthia married an Army private. Her daughter, Kelly, was born that same year. The couple divorced in 1973 and in 1979 her former husband passed away under suspicious circumstances. As a single parent, Cynthia worked as a housekeeper, bookkeeper, and secretary, manager of a student family housing apartment complex, caterer and movie theatre clicker.

Cynthia began attending classes at Washtenaw Community College and subsequently transferred to Eastern Michigan University, where she received her Bachelor’s degree in Social Work in 1983. Cynthia continued her education and received a Master’s degree in Psychology and Counseling. For 30 years, Cynthia worked with children, adolescents and adults who experienced trauma and post traumatic stress disorder.

After Cynthia’s book, “Growing Up in the D: My Grandfather, My Mother, and Me” was published, she was interviewed on WRCJ, 90.9 FM by Program Director and On Air Host, Dave Wagner. Cynthia was tremendously pleased to share excerpts from her book and recall historic times in Detroit. On May 21, 2014, Cynthia was presented the Ford freedom Award for exemplifying, in her memoir and charitable efforts, how the power of perseverance helped her endure the challenges of her family and her life. The award was presented at the Music Hall for the Performing Arts in Detroit. Other 2014 award recipients included Lt. Colonel (Retired) Alexander Jefferson of the Tuskegee Airmen, Civil Rights Activist Myrlie Evers-Williams and Former President of South Africa, Nelson Mandela.

Cynthia is also an accomplished professional artist specializing in nautical and seascape oils. Her interests include the environment, hiking, reading and volunteering at the Northville Historical Society. She is an avid Detroit Tigers baseball fan.

Professional Speaker Topics
I provide power point presentations which consist of historic photographs taken in Detroit during the 1950s and 1960s and excerpts from my book, "Growing Up in the D: My Grandfather, My Mother, and Me." The historic photographs were taken by Alan Deneau, National Award Winning Photojournalist who worked for the Detroit News, Channel 7 News and WWJ-TV during the era I talk about in my book.

In addition, I provide a historical perspective of the life and times in Detroit after the Civil War, as the Underground Railroad expanded, and during the Industrial Revolution and the Civil Rights Movement.
Favorite Quote or Personal Motto

"All endings are also beginnings. We just don't know it at the time." Mitch Albom