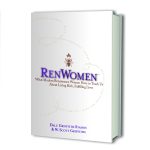 The authors come from their own multi-faceted backgrounds.  Dale Griffiths Stamos is a playwright, screenwriter, poet, teacher, and producer. (For more info, see: http://www.dalegriffithsstamos.com). W. Scott Griffiths is an entrepreneur, branding and marketing expert, professor, and author/co-author of five published books.

There is a growing market for books about the power and values of women, represented by current books like The Athena Doctrine, Lean In, End of Men, Vital Voices, and the documentary film (by Emmanuel Itier), Femme: Women Healing the World. RenWomen distinguishes itself as both aspirational and inspirational. It presents pragmatic lessons on how, as women, to achieve at one's highest level, while also showing the deeper values at the heart of such achievement. In our constantly shifting, global, and confounding 21st century world, "RenWomen" hold key insights into how to live an expansive life of joy, passion and living up to one's fullest potential.

Website #1
http://www.renwomen.com/
Blog
http://www.renwomen.com/blog
Facebook
https://www.facebook.com/RenWomen/
Twitter
https://twitter.com/renwomen
Location (city/state/country)
Los Angeles/CA/USA
Author bio
Dale Griffiths Stamos is a professional playwright, poet, screenwriter, and producer; as well as a teacher, story consultant and editor. She is the recipient of multiple awards - including the Heideman, The Writer's Digest top ten winner (twice), The Jewel Box Theatre Prize, and an Emmy nomination. Her plays have been produced throughout the country. Her film work has been featured at a number of festivals, and her poetry published in numerous journals and magazines. She occasionally dons a producer's hat through her company, Venice Sky Productions, producing or co-producing both theater and film projects. As a teacher and presenter, she holds a yearly workshop in story structure at the Santa Barbara Writers Conference and has spoken about writing to groups such as the Southern California Writers Association, the Writers Club, the Alliance of Los Angeles Playwrights, and Stage Day LA. Dale started out as a linguist, getting a masters degree in Romance Languages and Literatures, and she speaks French, Spanish, some Italian, and even a bit of Greek! A musician and songwriter as well, she plays keyboard and guitar.
Professional Speaker Topics
What is a Modern Renaissance Woman?
10 Personality Traits of the Modern Renaissance Woman.
Story Structure: The Five Questions
Story Structure: Applying Story Structure Techniques to Memoir Writing
Story Structure: Three Act Structure for Novels, Plays, and Memoirs