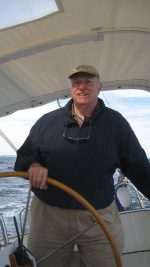 Genre
Authors
Most Recent Book Title
The Navigator: A Perilous Passage, Evasion at Sea
Book Description
How does Captain Joe Anderson get home from the Bahamas after his boat has been stolen, leaving him broke and unemployed in the depths of the present recession? He signs on to sail to the States aboard a sixty-foot sailboat. But once at sea, Joe learns that the boat owner--wealthy, unscrupulous, philandering Alex Smith--is attempting to smuggle $2,000,000 cash back into the U.S. for use in an insider trading deal. Thinking only of himself in his desperation to return home, Joe relinquishes his moral judgment and merely concentrates on making a safe passage, expecting that, once ashore, somehow he will get out of abetting Alex’s crime.
But the two men also must deal with Smith’s zany and volatile wife, Frances, who shoots first and never asks the questions; and a young widow, Mary, who expected a short little cruise but becomes captive aboard due to unexpected circumstances. Departing from Man-O-War Cay in the Abaco, the four sailors encounter murderous weather and modern pirates who are after the money. What originally began as a pleasant voyage soon turns into a desperate race to outrun a hurricane and evade the thugs. Bonding with Mary in their struggle to survive, Joe realizes that to keep her lawful he must thwart Alex’s plot. The novel offers a stirring adventure filled with moments of both humor and dire seriousness as the foursome alternately clash with one another and then pull together to survive. It's an adventure you will remember.
Additional Book Titles
The Biography of Admiral Noel Gayler, USN (not yet published)
Slough Na Mor: An Irish Story (novel, not yet published)
Website #1
http://www.captstevestories.com
Website #2
http://www.navigatornovels.com
Location (city/state/country)
Birmingham, Alabama
Author bio
Stephen B. Coleman, Jr. (Steve) earned a Bachelor of Arts in history from Duke University and a Master of Arts in English from University of Alabama. Father of three sons, his professions have included naval officer, English teacher, coach, camp counselor, small business operator and commercial real estate broker.. He has been an instrument-rated Private Pilot, held a Master’s license for sailing, has authored biographies and histories of local interest, magazine articles and poems, and has served as president and board member of a number of civic organizations. He holds to the belief that a man, though bound by the circumstances of his surroundings and the limits of his abilities and perception, has the God-given free will to act for the better good. Noted for his numerous and varied accomplishments, he brings to his writing a wealth of experience. Now seventy years old, what distinguishes him most is that in his action-filled stories, he is a generous teacher, not an academe, but someone who shares his philosophy, knowledge, skills and love of people, life and adventure.