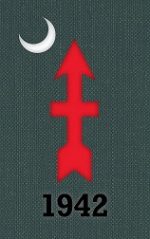 South Carolina servicemen made an exceptional and early contribution in WW II, when in February 1942 a group of them, all products of the state's four pre-war ROTC programs, were assigned to the 32nd "Red Arrow" Infantry Division (Michigan-Wisconsin National Guard). In this odd and expedient pairing, and in one of the earliest Infantry units to be ordered overseas after the Pearl Harbor attack, they participated in the first offensive waged in the Pacific Theater under General Douglas MacArthur's command. In victory, the Red Arrows suffered over 90% casualties there at Buna, Papua New Guinea. Those who emerged from that first tragic and defining battle stayed on to form the Division's core of leadership for the remainder of the war, and in doing so amassed some of the highest total hours in combat in U.S. Army history. The title "32 Answered" alludes not only to the Division's nomenclature but also to the thirty-two total documented South Carolina reservists discovered in the course of this research, who stepped up to answer the call to duty soon after the war emergency's onset
Website #1
Southern Gentlemen, Red Arrows
Amazon Page
http://www.amazon.com/32-Answered-South-Carolina-Veterans/dp/1507859619/ref=sr_1_1?s=books&ie=UTF8&qid=1462754701&sr=1-1
LinkedIn
https://www.linkedin.com/profile/preview?locale=en_US&trk=prof-0-sb-preview-primary-button
Location (city/state/country)
Greenwood, SC USA
Author bio
Joe Camp, a South Carolina native, earned a Ph.D. in United States History at West Virginia University (2002). His background includes technical writing as well as public history and teaching at both the community college and university levels.