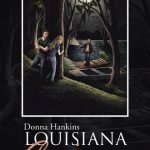 Genre
Authors
Most Recent Book Title
Louisiana Cajun Girl
Book Description
The wet lands of Louisiana hold many secrets. In this spiritual, paranormal, romance, a young Cajun girl, Marcie, a tomboy raised by her parents on the edge of the swamps, is about to learn some lessons of life from the other side. Several months after the unexpected death of her dad, Marcie starts having ghostly visitations directing her to the middle of the Spring Bayou area among the snakes and alligators to find direction in her life from none other than a recluse that the people of the town call the Swamp Man.
Website #1
https://www.amazon.com/Louisiana-Cajun-Girl-Donna-Hankins-ebook/dp/B01DMJHZH6/ref=as_li_ss_il?_encoding=UTF8&qid=1467061817&sr=8-2&linkCode=li2&tag=lestjo-20&linkId=c3a5ed631c2ca260b28f0157c0a19a46
Location (city/state/country)
New Orleans, Louisiana USA
Author bio
Donna was born and raised in New Orleans, Louisiana. She graduated high school in 1974 and went on to get married, raise a family, and travel. In 1993 she relocated back to central Louisiana, where she settled with her three children, went back to school, and eventually started working for the state of Louisiana. Around the time of the death of her sister in 2010, her world expanded spiritually to show a new dimension of reality that launched her on a new path of growth and learning. She recently retired from the Department of Corrections after twenty-two years and has started her new career as a fiction writer.